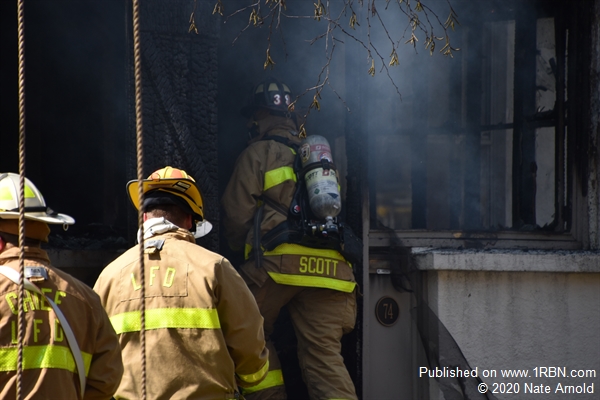 Photo by Nate Arnold Longmeadow crews survey the Alpha side of 74 Forest Glen Road after the main body of fire was knocked down.

A porch fire that was started by an electrical malfunction damaged the front of an occupied two and a half story wood frame single family dwelling in the affluent bedroom community of Longmeadow early Sunday Morning April 19, 2020.
WESTCOMM public safety dispatch received the 911 call shortly before 9:30 a.m. for a porch fire at 74 Forest Glen Road. The first in Longmeadow FD engine reported heavy smoke and fire venting from the Alpha side, first floor of an occupied two and a half story dwelling and called for a second alarm to be struck as they were stretching their two and a half inch attack line. Off duty Longmeadow members were recalled along with mutual aid from East Longmeadow and North Thompsonville FD in Enfield, CT who responded to the scene while other Enfield firefighters from the Shaker Pines and Hazardville districts responded to cover Longmeadow's firehouse.
Using the two and a half and smaller caliber handlines, crews on scene were able to knock down the main body of fire within 15 minutes but spent the next several hours checking for extension and overhauling the building. The home sustained significant damage in the fire and the occupants were assisted by the Red Cross.