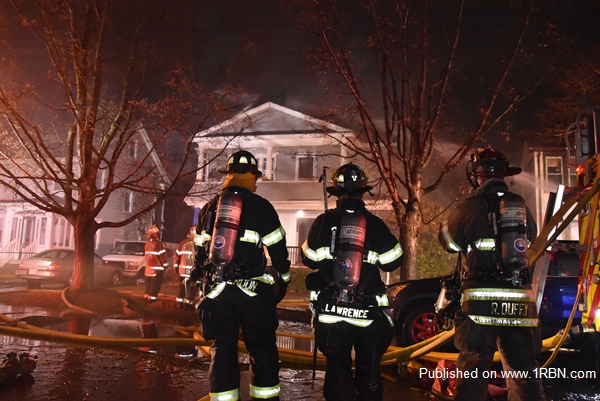 Photo by NATE ARNOLDMembers take a blow on the 'A' side as exterior operations continue. 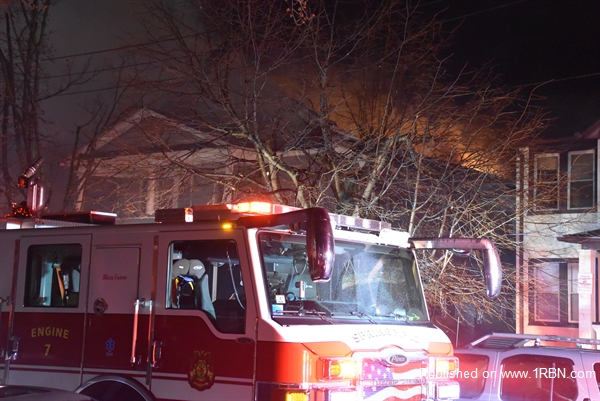 SPRINGFIELD, MA - A late evening fire in a two-and-a-half story, wood-frame, single-family dwelling destroyed the attic, displaced several residents and sent one Springfield firefighter to the hospital for treatment of non-life-threatening injuries on April 1st.

Companies responded to the alarm shortly after 10:00 P.M., and first due Engine 7 struck the second-alarm on arrival when they pulled into the scene and had heavy fire venting from the roof of 284 Lexington and siding melting on the 'Bravo' side exposure building. Companies wasted no time in getting big water on the fire, opening up with master stream appliances as soon as water supplies were established.

Crews had the bulk of the fire knocked down within 45 minutes and then headed inside to chase hot spots and overhaul the remains of the second floor and attic. During this part of the operation, two members ascended ground ladders on the 'Bravo' side to begin pulling siding down and with little warning, a large section of a rain gutter came crashing down on one member, who was some 10 to 12-feet up his ladder.

The gutter came down at such an angle and with terminal velocity that it knocked the firefighter off of his ladder and sent him to the ground, bouncing off the side of a vehicle parked in the driveway before hitting the pavement. Miraculously, the firefighter got up under his own power and tried to walk off his injuries before paramedics on scene convinced him to let them transport him to the hospital for evaluation.

The home sustained severe damage in the fire, but aside from the injured SFD firefighter, no other injuries were reported. The cause of the fire remains under investigation by the SFD arson squad.