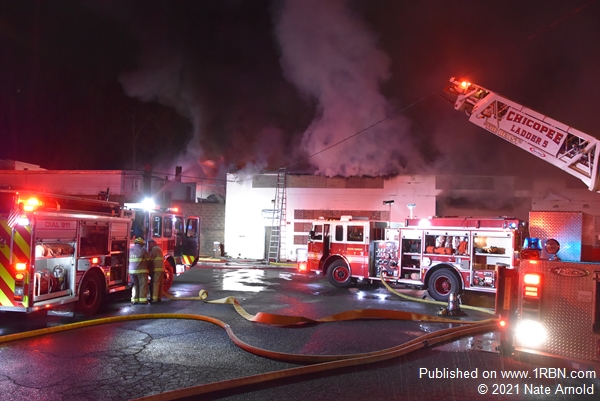 Photo by Nate Arnold Smoke rises from the 'Alpha' side as Ladder 5 retracts their aerial from the roof. 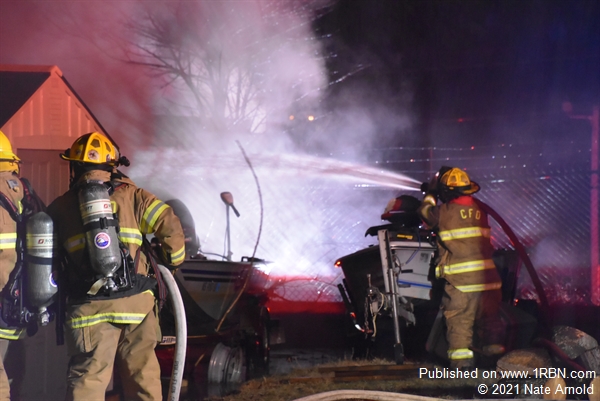 Photo by Nate Arnold Hand lines are played into the 'Bravo' side from a neighbor's yard.

CHICOPEE, MA - A smoky fire heavily damaged a commercial building in the Aldenville neighborhood of Chicopee, MA just after 9:00 P.M. on March 24th.

9-1-1 callers phoned in the alarm to WESTCOMM dispatch center reporting heavy smoke in the area of Chicopee Masonry Supply at 451 McKinstry Avenue. Engine Co. 7, whose firehouse was several blocks away, arrived first to find smoke rolling out from the 'A' side of a large concrete block building moments later.

First-alarm companies made entry to the building and began searching in zero visibility conditions for the seat of the fire, but were slowed in their progress by large quantities of product stored inside. As conditions worsened, McKinstry Command made the decision to strike the second-alarm and bring more personnel and equipment to the scene to aid in the fire fight.

Crews spent the next hour searching for the seat of the fire, but when flames began to roll out of the 'Bravo' side the attack switched from offensive to defensive and hand lines were opened up on the 'Alpha' and 'Bravo' sides.

Crews remained in a defensive mode until nearly 11:30 P.M., when the smoke subsided and overhaul and ventilation could begin. The building sustained several thousand dollars worth of smoke, heat and water damage, but no civilians or firefighters were injured.

The cause of the fire is under investigation the CFD and the State Fire Marshal's office.