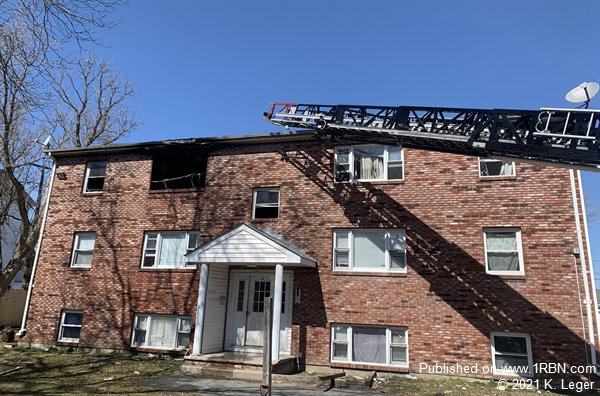 Photo by K. LegerLadder 2 to the roof.

FALL RIVER, MA - On Sunday afternoon, March 21st, firefighters responded to 34 Roy Street for a still alarm. Engines 2, 4 and 9, along with Ladders 2 and 4, Rescue 1 and Car 3 responded. Ladder 2 reported smoke showing on approach. On arrival, Command had fire showing from the top floor of a six-family home. Engine 4 stretched their leader lines to the rear door and (two) one-and-three-quarter inch attack lines to the front door. Ladder 2 used the aerial to reach the roof for ventilation and members had the fire knocked down quickly. Six families were displaced. While the investigators were still on scene a second still alarm was sent out around 4:30 P.M. to 58 Manchester Street, where first due firefighters had flames blowing out the front windows of a single-family home. Because there were still trucks on the air from the previous fire numerous apparatus responded over the initial alarm companies and once again knocked down a roaring fire.