Orange Fire Dept. Responds to Record Number of Calls, Lays Out Goals for 2021 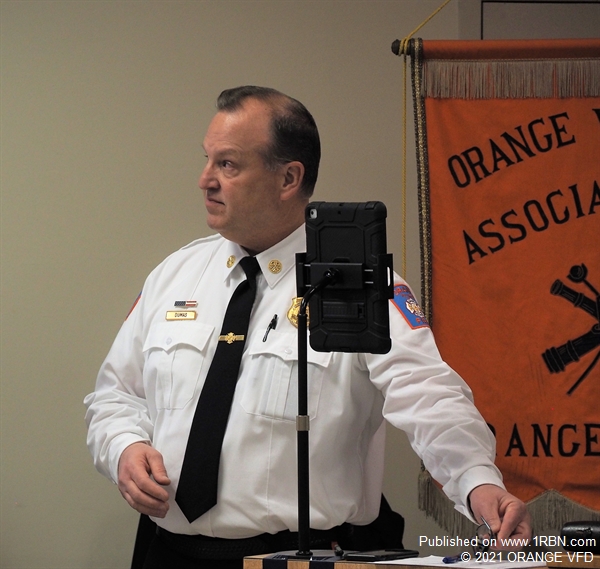 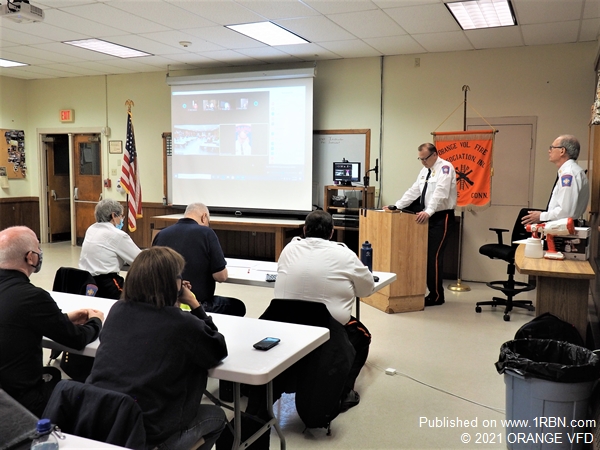 Photo by ORANGE VFDFirefighters met by Zoom except for officers and those required in person at the meeting. At the front of the room is Fire Chief Dumas and Deputy Chief Charles Sherwood. 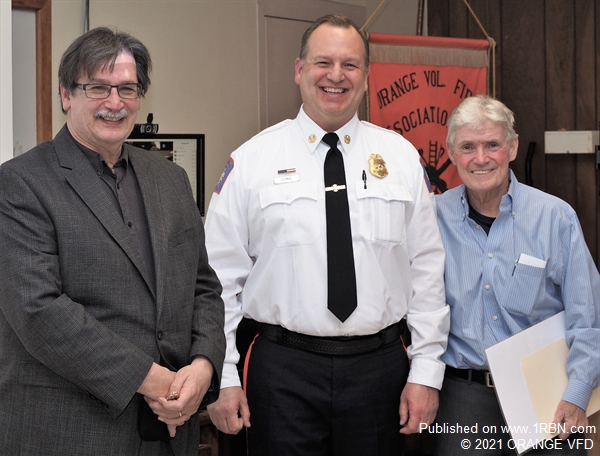 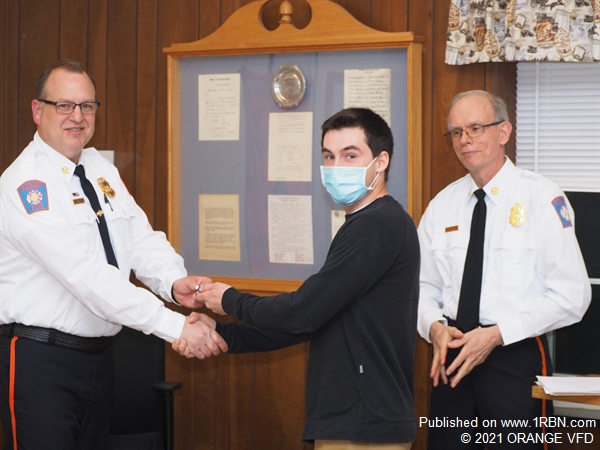 Photo by ORANGE VFDChief Dumas congratulates Firefighter Jesse Bartha, who was commended for his work at a fire. Looking on is Deputy Chief Sherwood. 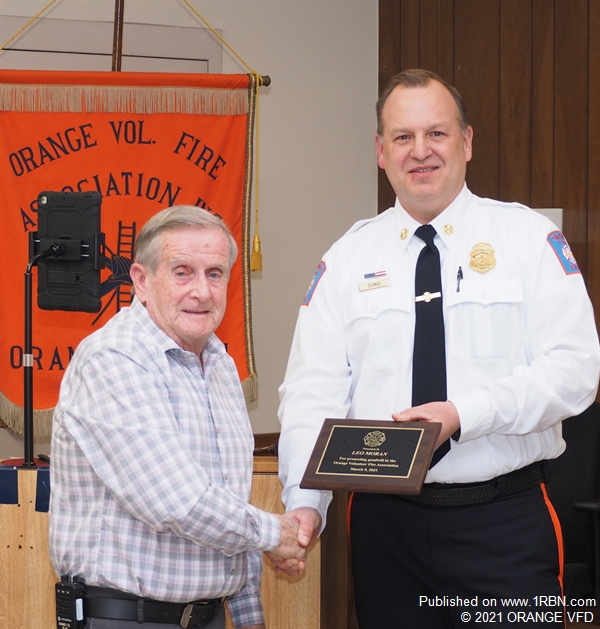 Photo by ORANGE VFDFirefighter Leo Moran, left, was recognized for his promotion of goodwill in the department. 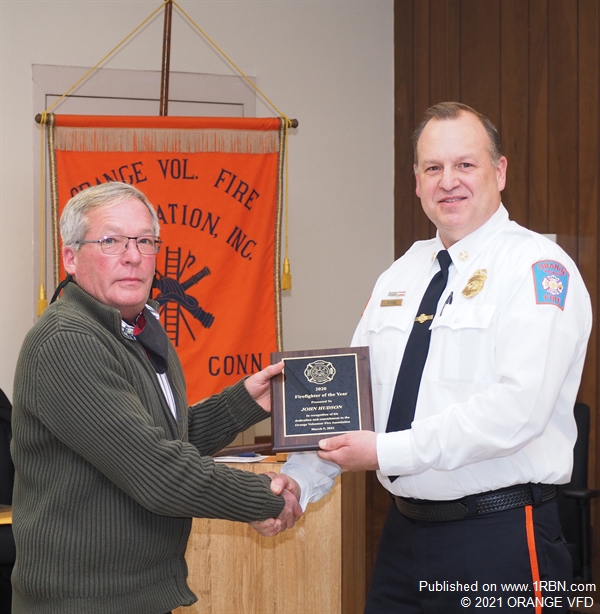 Photo by ORANGE VFDFirefighter John Hudson, left, was named firefighter of the year.

ORANGE, CT – Volunteer firefighters in Orange responded to 674 calls for help during 2020, a record number of responses in one year.

The number of calls was announced during the Orange Volunteer Fire Department’s annual meeting, during which Chief Vaughan Dumas reported on accomplishments for 2020 and the outlook for 2021. In addition, firefighters heard from First Selectman James Zeoli, Fire Marshal James Vincent and several other reports.

Also during the meeting, several firefighters were recognized for work they did during 2020 and two citizens were made honorary members in recognition of their work on behalf of the Fire Department.

Marking the unique nature of these times, the annual meeting was broadcast over Zoom with minimal in-person participation. In the past, the meeting was part of an annual dinner meeting and celebration. First Selectman Zeoli appeared on Zoom, talking to the firefighters.

A written report from Fire Marshal James Vincent addressed personnel changes after 2020 started with the tragic death of Fire Marshal Tim Smith. Vincent praised the cooperation that the Fire Marshal’s Office and the Fire Department have been enjoying. The two entities are working on a new fire-reporting system and doing other work together.

“You are a progressive fire department and you’re not afraid to put in the work,” he told the firefighters.

Orange Volunteer Fire Department Auxiliary President Jillian Gagel reported that despite the obstacles presented by 2020 and COVID-19, the group would be donating $2,020 to the department. She also reported that the Auxiliary would be running its Egg My Yard fundraiser for the third year. With almost 100 people signed up already, they are enjoying a great response. The public can get more information about the program by contacting (203) 907-9054 or emailing OVFDAuxiliary@hotmail.com.

In his annual report, Chief Dumas acknowledged the challenges of 2020. He recognized two members who succumbed to COVID-19 as well as the fund-raising challenges.

He announced that firefighters responded to a record 674 calls including 84 fires. It’s the most calls and the most fires in one year since the organization's creation 96 years ago.

Dumas thanked James Leahy, vice chair of the Board of Finance, and town resident Rich Roberts for creating the 50K Fire Truck Challenge. The effort not only raised funds but raised awareness.

“Their efforts did so much more than provide us with a fund-raising solution,” said Dumas.

“We created such an awareness in the community that we’re here and we do all this for free. It would be very challenging for anyone to say they didn’t know we had a volunteer fire department.”

Other accomplishments included the establishment of a Junior Firefighters program for people 16 to 18 years old.

Moving forward, Dumas cited plans to return to in-person training now that many firefighters have been vaccinated against COVID-19. The department also is beginning to plan its 100th anniversary in 2025, discussing the replacement of a 25-year-old pumper and continuing to improve fire response techniques and plans.

“I want to continue make the department progressive with new technology and new techniques,” he said. “But I’m not going to forget where we came from.” He announced an effort to gather the history of the department and honor its older members.

In addition to his report, Dumas honored Firefighter & Assistant Treasurer Art Williams for 45 years of service and Firefighter George Geane for 25 years of service. The chief demonstrated the department’s appreciation by making Leahy and Roberts honorary members. He announced that Lt. Eric Demeraski, Lt. Mitch Volta, Firefighters Noah Clark, Christian Haupt, Drew Panapada and Dave Gagel were being awarded a unit citation for their actions at a fire on Ridgeview Road last March. Their fire engine was first on the scene.

“The fire was challenging and hard to find,” said Dumas. “Had it not been for the swift action of those members, we would not have had the positive outcome we had.”

Firefighter Jesse Bartha also was recognized for his actions at a fire on Chippendale Road in July. On arrival, firefighters could smell smoke, but had to search for the fire. Bartha, using a water can, located the fire and knocked it down.

Firefighter Leo Moran was awarded for constant promotion of good will in the department. Firefighter John Hudson was recognized as firefighter of the year.