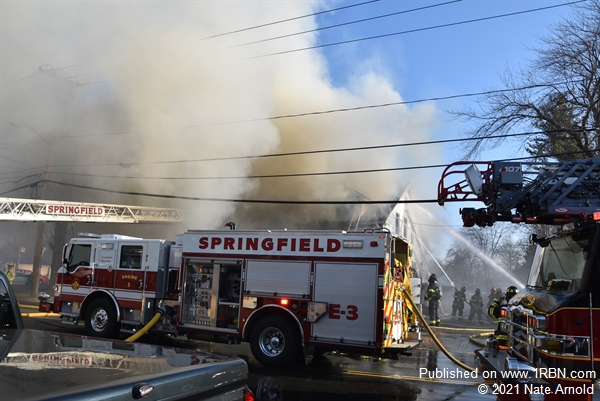 Photo by Nate ArnoldHeavy smoke pushes from the 'A' side of 1179 Bay St. 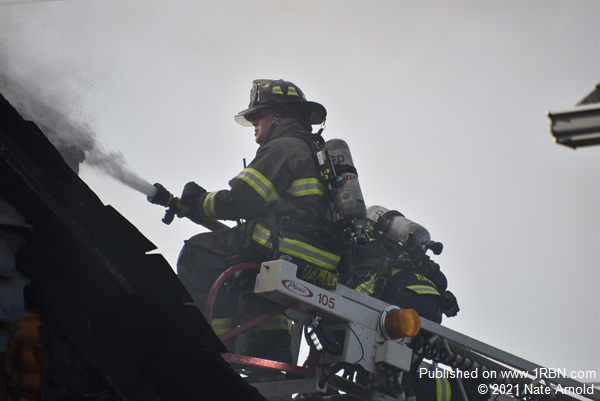 Photo by Nate Arnold Truck 4 FF Dan Damours plays away into the building with a hand line from the tip of Truck 4’s aerial.

Springfield, MA - A fast-moving fire tore through a single-family home in the Pine Point neighborhood of Springfield on the afternoon of Wednesday, March 10th, displacing five residents and injuring one member of the Springfield Fire Department.

Springfield Fire Alarm operators began receiving 911 calls for the address of 1179 Bay St. just after 3:00 P.M., and responding companies noted heavy smoke in the sky from a distance. Crews arrived on scene to find heavy fire venting from the first floor 'Alpha' side and extending up to the second floor and attic. Due to overhead high tension power lines, the first due truck company experienced some delay in getting their aerial to the roof, but engine companies fought hard to make a push into the home with hand lines in an effort to control the fire without the benefit of vertical ventilation.

Despite valiant efforts by the balance of the first-alarm assignment, Bay St. Command ordered all members out of the building 20 minutes into the operation due to deteriorating conditions inside. Crews pulled back to a defensive posture and played away with multiple hand lines and master streams to bring the fire under control in an hour before heading back inside to chase hot spots and overhaul the building.

During the course of the operation, one member was injured by falling glass but was treated for non-life-threatening injuries by EMS personnel. The home is considered a total loss and the cause of the fire remains under investigation.