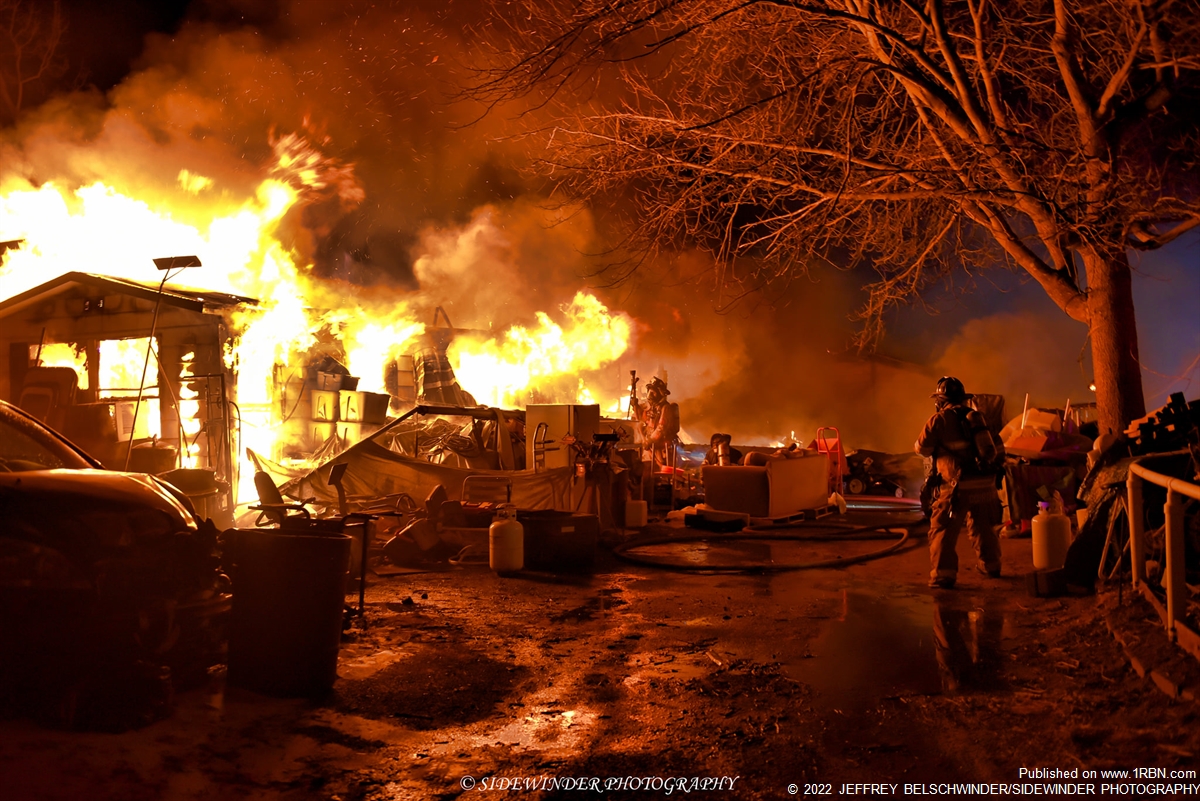 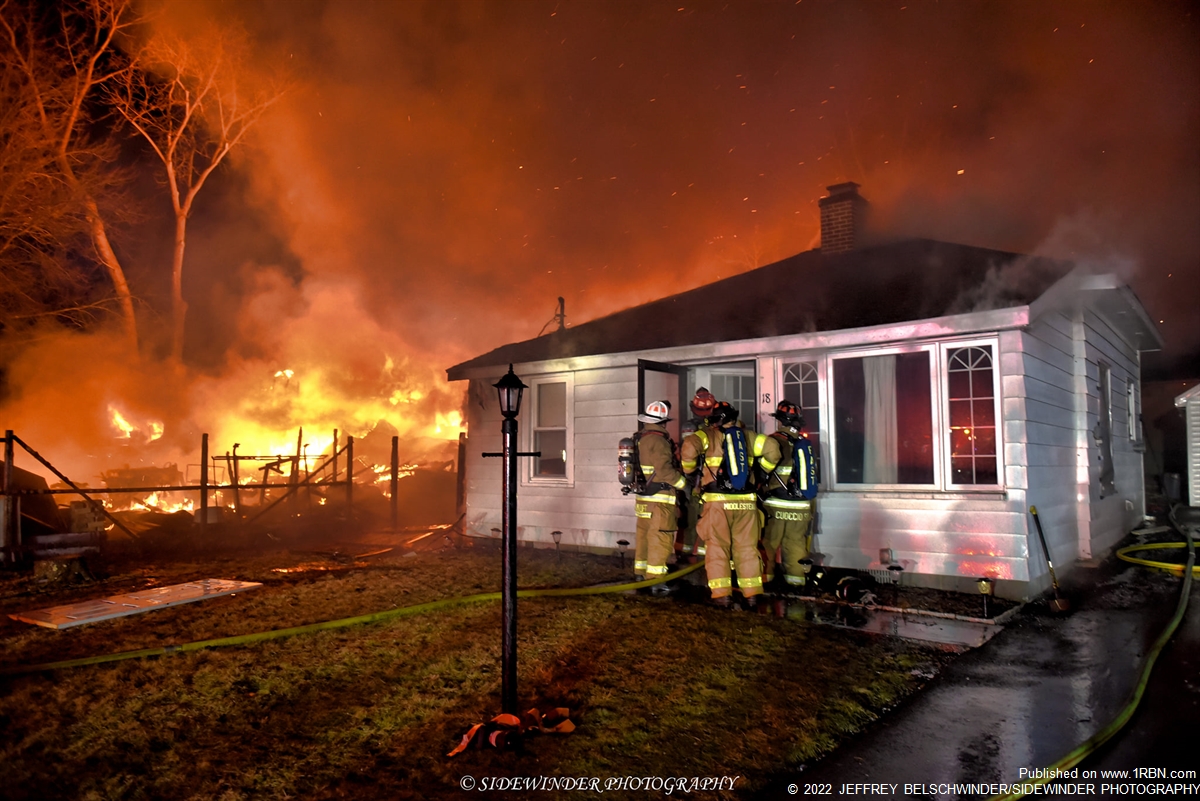 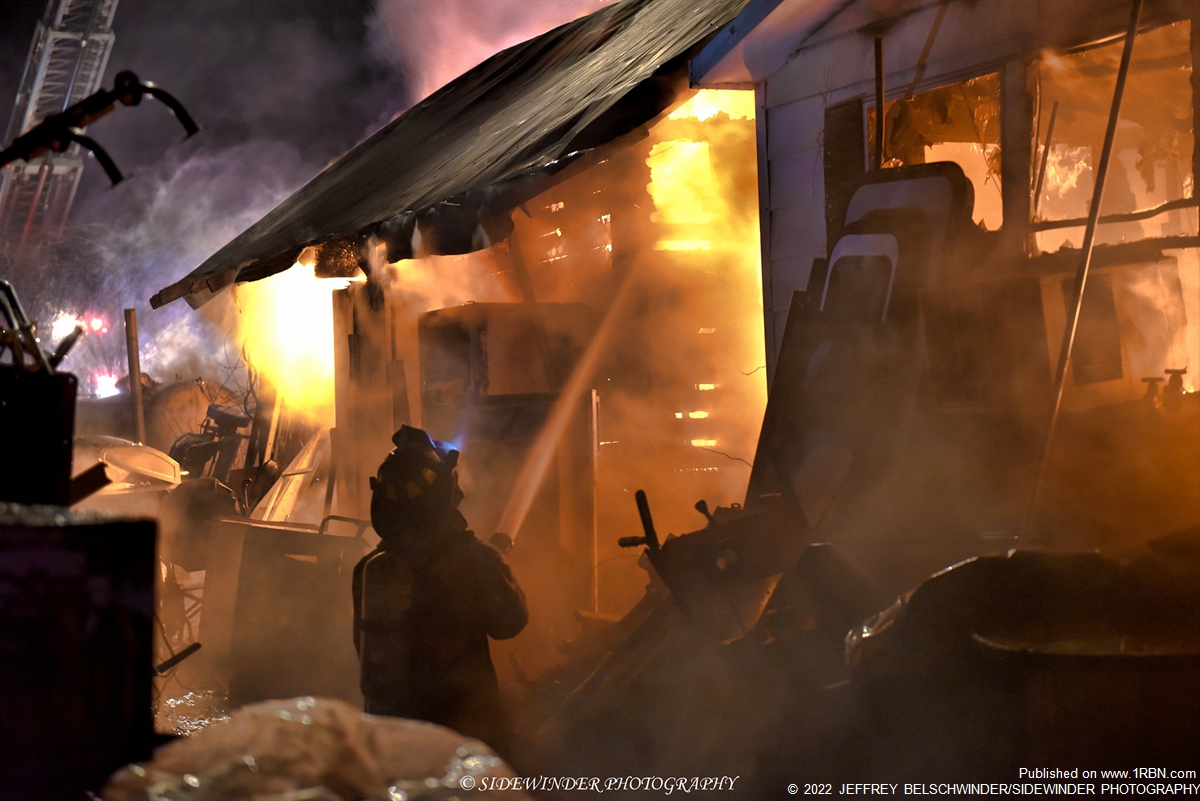 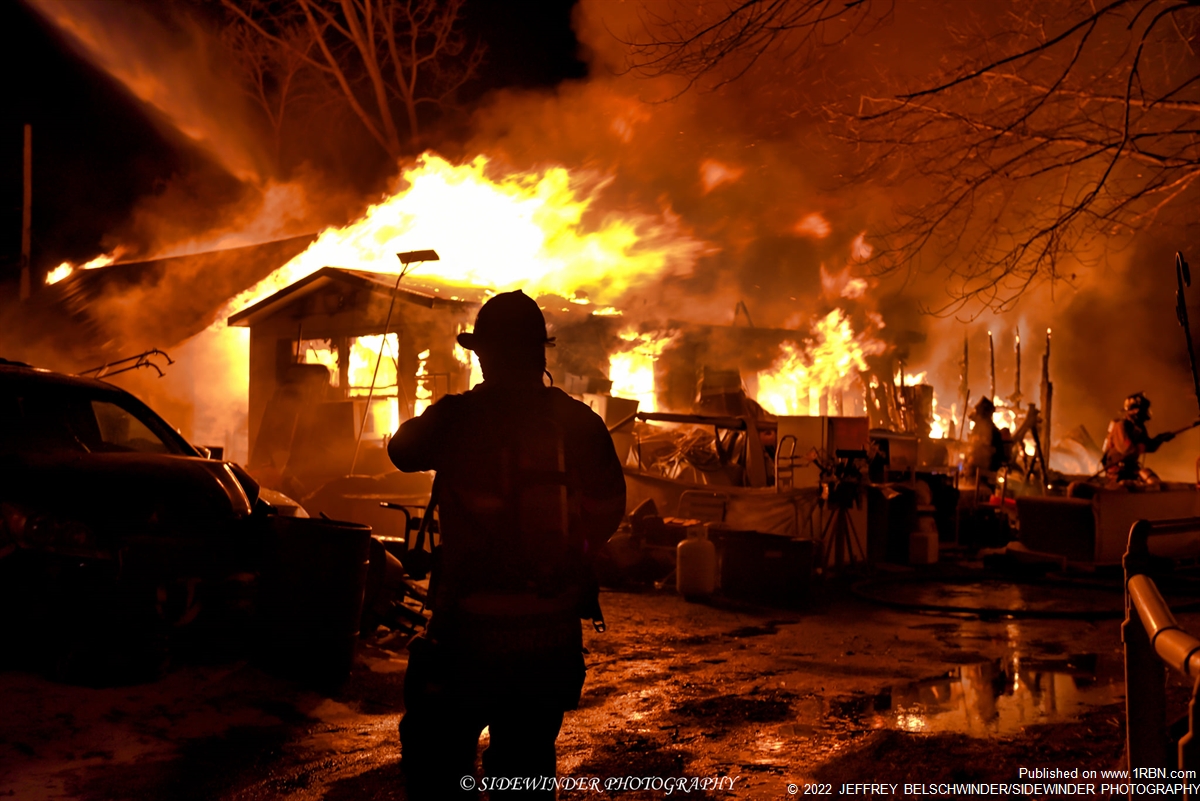 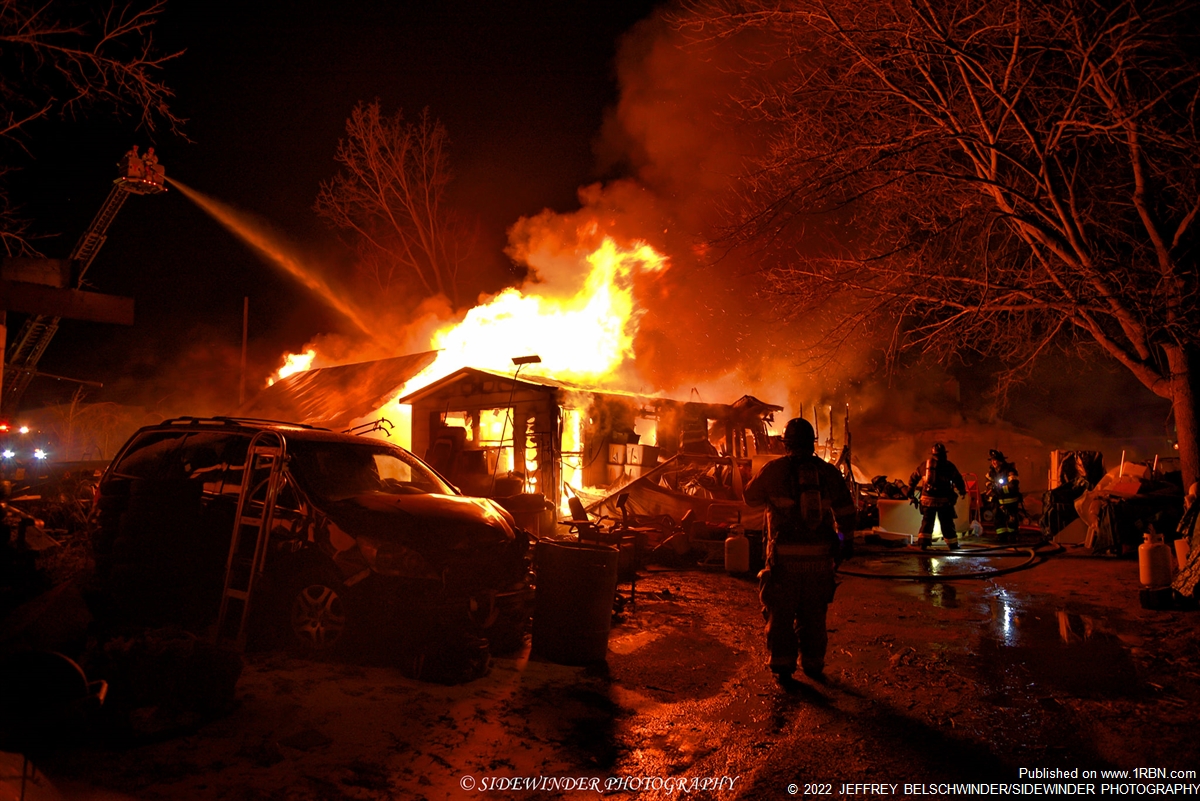 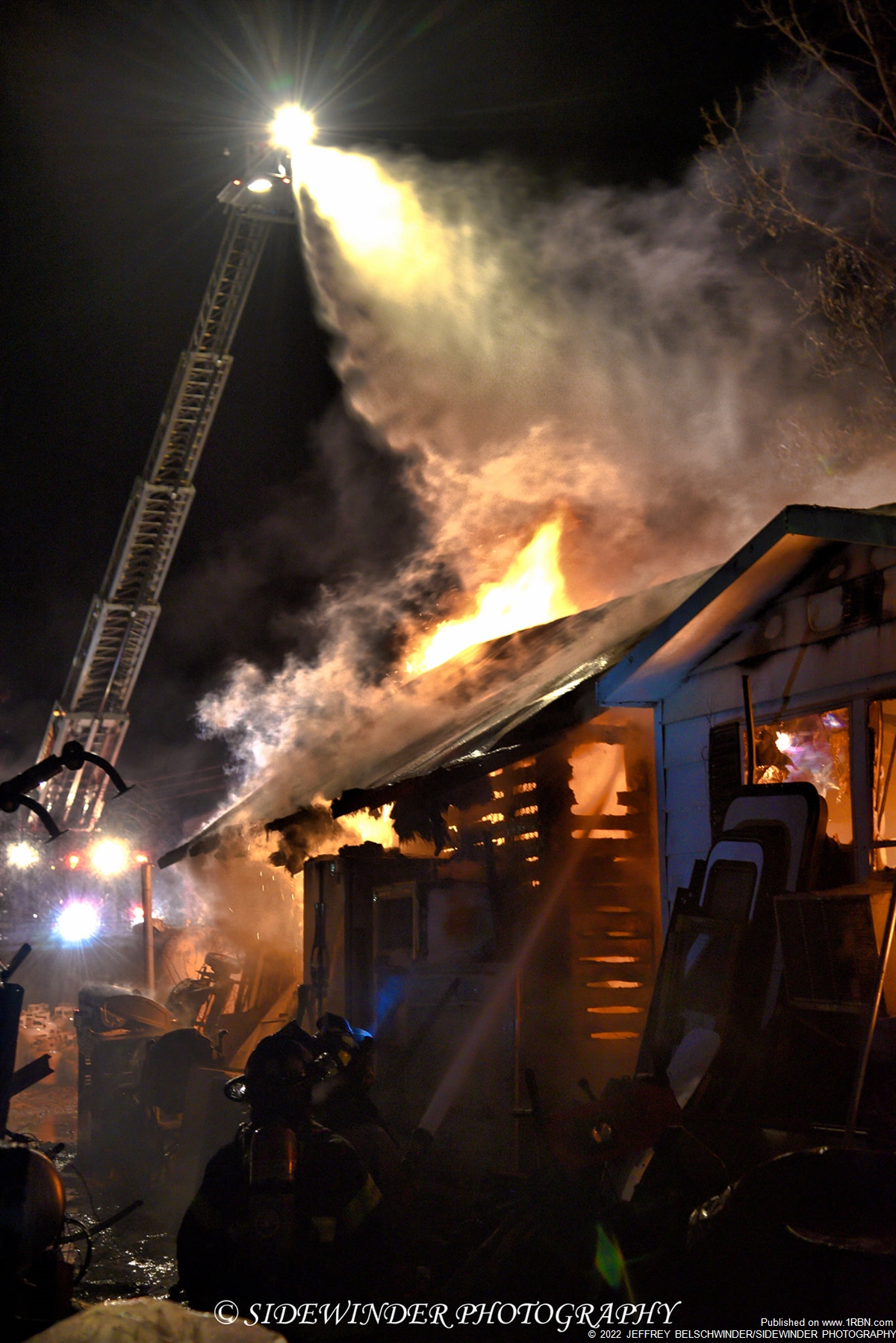 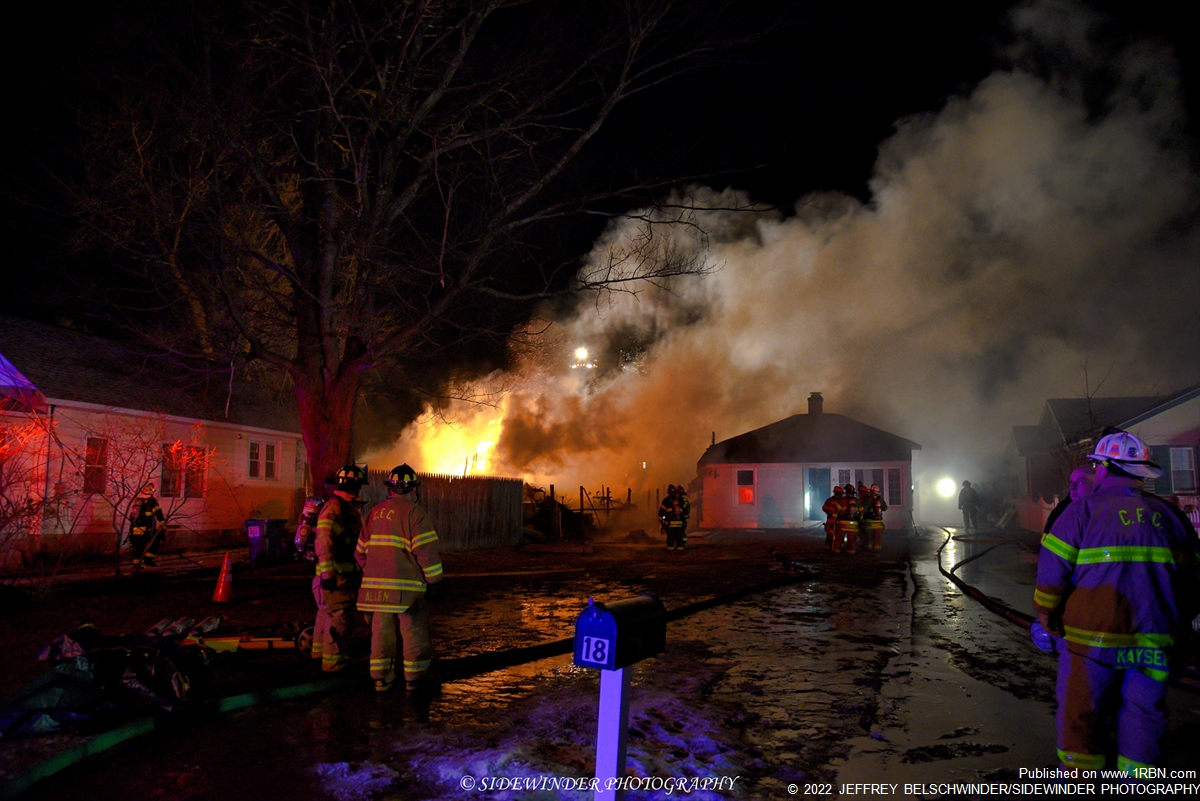 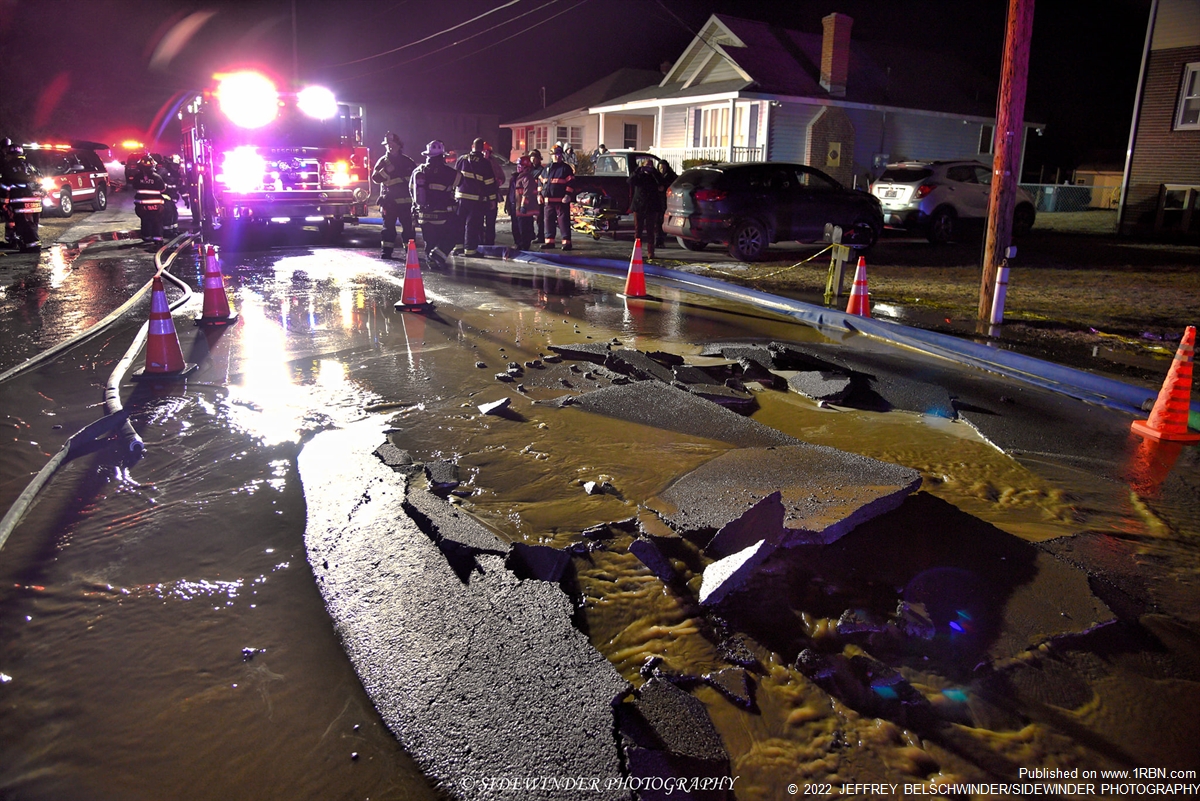 COLONIE, NY - On February 21st just before 1:42 A.M., the Fuller Road FD along with the West Albany FD, Shaker Road FD, Colonie Village Fire Co. for the FAST team, and Colonie EMS were dispatched after multiple callers reported a house explosion in the area of 18 Spruce Street. The city of Albany’s FD was also dispatched, as they were also taking calls for the incident in their dispatch center.

Heavy winds fueled the fire and created a massive glow that could be seen from miles away as a thick smoke column pushed into the morning sky. A Chief from Fuller Road FD was en route to the scene and notified the dispatcher that he had a heavy column of smoke visible from Colonie Central High School, and made sure that he had a FAST team on his box alarm. The dispatcher came back on the air and stated that they now had a vehicle on fire in the driveway as well as a second house catching on fire. Engine 459 and Rescue 9 from the Colonie Duty Crew called en route to the scene within one minute of the initial dispatch.

Multiple massive fireballs shot up over the houses 30-feet into the air as the Fuller Road fire chief arrived on scene. The chief immediately transmitted the second-alarm, as he had multiple well involved structures with several exposure issues, along with explosions, downed power lines, and a vehicle on fire in the driveway. The second-alarm dispatched the Midway FD, Stanford Heights FD, McKnownville FD, and the Westmere FD to the scene.

As Engine 459 pulled down the street firefighters from the rig began deploying a one-and-three-quarter inch hand line to the exposure building while another firefighter jumped to connect to the nearest fire hydrant located only a few feet away. Crews used a deck gun from the top of the rig to knock down some of the heavy fire pushing from the rear of the building, but the main fire scene at 20 Spruce Street was too far off the roadway.

Rescue 9 pulled behind Engine 459 and several firefighters jumped from the rig to make their way to a structure that was beginning to catch fire from the heavy flames pushing from the neighboring property. With fire shooting 40-feet into the air, the neighborhood was being covered in thick smoke and embers as heavy winds carried them in a westerly direction across the neighborhood. Firefighters made their way up the driveway to the rear of the main fire building where they discovered numerous hazards, including close to 100 propane cylinders and multiple structures on fire.

As crews used several hand lines to try and bring the fire under control, multiple explosions from the structure started to occur, sending fire over firefighters' heads, and a large wall collapsed outwards and landed in the driveway next to the firefighters. As crews in the rear of that building were conducting a quick size-up, they discovered several 20-pound propane tanks surrounding a 500-pound propane tank that had heavy fire impinging on it. Midway's Truck company diverted down Railroad Avenue and took up behind the structures that were on fire and began to set up master stream operations.

Command confirmed that everyone was out of all the homes, and that they just had a collapse of a large structure behind 20 Spruce Street. Firefighters from Engine 412 and Rescue 9 deployed a blitz fire to the lawn of 18 Spruce Street and began to conduct master stream operations on the fire that was impinging on the home. Firefighters made their way to the front door of the neighboring structure and forced entry to find siding heavily involved and heavy smoke pushing from the eaves of the roof.

The heavy roar of the fire from the main fire building made it hard to hear on the fire grounds as firefighters in the rear of 18 Spruce Street notified command that they had a garage starting to catch fire. After multiple fire hydrants on the street were found to not be working, firefighters were finally able to establish a second supply line from Fuller Road. Despite the second supply line, firefighters continued to experience heavy water problems on scene.

As heavy fire pushed down on crews in the rear of 20 Spruce Street, firefighters turned their attention to the well involved truck fire in the driveway. The gas tank in the vehicle had dropped out and free flowing fuel was traveling down the driveway on fire. Items in the yard began to catch fire due to the significant amount of heat and fire load from the main fire building, including fences, garbage cans and furniture.

Firefighters kept their heads on a swivel, as they had close to 100 propane tanks ranging in size from 5-pounds to 20-pounds, as well as a 500-pound tank all throughout the rear of the property. Several tanks began to purge as they were being heated by the fire from the burning structures.

As master streams from the truck company set up on Railroad Avenue and began to pound the top of the building that was on fire, heavy amounts of steam started to push over onto the adjacent structure and onto the fire grounds in the street. Exhausted firefighters in the rear of the building kneeled for a moment to catch their breath and then continued to push forward.

Firefighters at 18 Spruce Street were able to knock down the heavy fire condition inside the home and on the side of the structure and then began to conduct extensive overhaul. Just as crews were beginning to gain control of the fire, brown water and sand started to push up out of the ground from underneath Rescue 9. The pump operator immediately notified command that they had a water main break underneath the apparatus.

As firefighters made their way back to the rig, the ground began to push upwards towards the frame of the rescue. The driver made an emergency decision to shut down his pumps and disconnect the supply lines. Firefighters raced down the street to shut down the fire hydrant that was feeding their supply line on scene. While they were doing that, a group of 10 firefighters quickly began pushing the large diameter hose off to the side of the road.

No sooner did the pump operator get the supply line shut down when the road underneath the apparatus began to crumble. The operator worried about the heavy apparatus caving in to the developing hole underneath the apparatus and made an emergency move to pull back over 25-feet from the hole. As the rescue was being moved, a set of one-and-three-quarter inch hand lines got hung up in a nearby parked car and the vehicle was dragged. The water department was notified, as they were already en route to the scene due to the previous water supply issues. Firefighters on scene were down to a single engine that continued to provide suppression efforts.

Fire investigators began to survey the massive scene as Colonie’s Fire Services Mobile Air Unit arrived and began to fill air bottles for firefighters. The North Bethlehem FD arrived on scene with their advance scene support unit and set up warming tents and items to keep the firefighters hydrated.

The water department was finally able to shut down the water main on Spruce Street, and due to multiple buildings being heavily involved during the incident, National Grid cut power to the street. A large hole formed in the middle of the roadway where the water main had broken. If it was not for the quick-thinking driver of the rescue company, the weight of the apparatus could have caused the vehicle to sink up to its frame.

No injuries were reported, and the fire is currently under investigation. Multiple buildings were destroyed by the fire, and one of the homes was heavily damaged. Firefighters remained on scene until the late hours of the morning conducting overhaul.