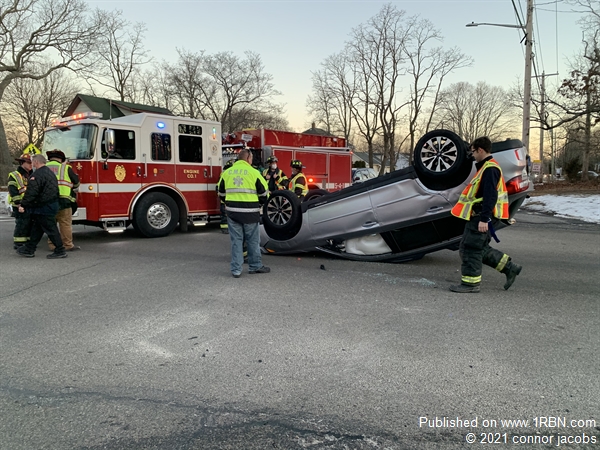 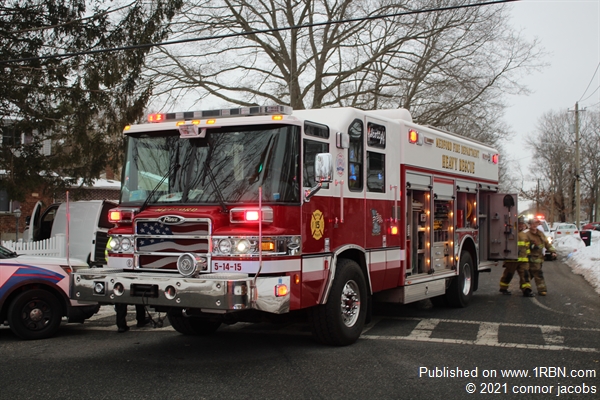 Photo by connor jacobs1 of the vehicles involved in the crash

Center Moriches, NY - At approximately 5:08 P.M. on Wednesday evening, February 24th, the Center Moriches FD and the Suffolk County 7th Precinct were toned out for a two-car MVA at the intersection of Brookfield Ave. and Frowein Road.

The first chief on the road was 1st Assistant Chief Phil Masterson, who was advised by Captain Jay Koncelik that he was on scene with a two-car MVA, with one car upside down and one person still inside the car, but not pinned.

Engine 1 (5-4-1), the first engine on the road, was ordered to come into the scene and bring their crew up to put speedy dry down on the fluid leak and also clean up debris that was in the roadway. Rescue 4 (5-4-4) was the second unit on the road and was ordered by command to bring the rig up and help block the road off.

Units that were on scene were 1 Engine, 1 Rescue, 2 Ambulances, 1 Chief and 1 First Responder. Two people reportedly suffered non-life-threatening injuries. Both patients were transported to nearby hospitals.

Suffolk County Police Department Emergency Service Unit was requested to the scene to upright the car from the road. Units remained on scene until ESU arrived. All units were back in service in under an hour.