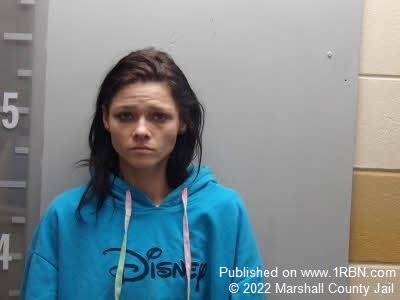 Arab, AL: Arab Fire Department was dispatched to a reported house fire on February 10, 2022, on Little Creek Rd NW. Crews with AFD along with automatic aid from 4CVFD and Ruth VFD responded. During the response, Marshall County 911 dispatchers advised units of reported gun fire occurring at the scene. Arab Police responded to assist with securing the scene.

Units arrived to find a well involved single-story residential structure with heavy flames and smoke visible from the rear of the structure. The fire was quickly extinguished. During the extinguishment of the fire, it was determined that the fire had been intentionally set during a domestic dispute between the man and woman that lived at the residence. Surveillance video obtained from a neighbor showed 28-year-old Haley Elizabeth Williams throwing burning items onto the wooden back deck which ignited the fire. During an interview with Arab Arson Investigator Todd Downs, Williamson admitted to starting the fire. Investigator Downs arrested Williamson at the scene, charging her with First Degree Arson. She was transported to the Marshall County Jail where she was booked in under a $50,000.00 bond.