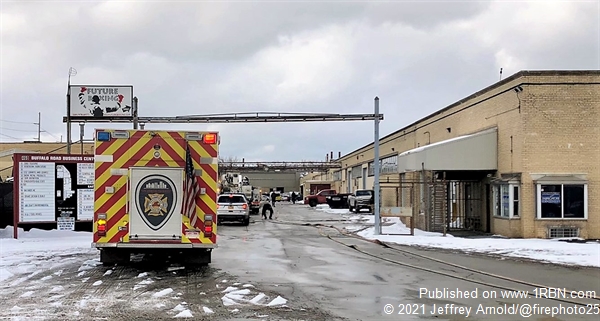 Rochester, NY - On Thursday, February 11th at 2:25 P.M., Rochester firefighters were dispatched to a smoke detector activation in a commercial building at 460 Buffalo Road.

Upon arrival, responding units were advised by employees that an explosion had occurred, and everyone was able to safely evacuate the structure. Due to the size of the building and the various chemicals used on the site, a second-alarm with a Haz-Mat response was called.

Firefighters were briefly ordered to evacuate until an assessment of the materials involved could be made. It was later determined that a 55-gallon drum of an undisclosed material had failed, causing the explosion. The resulting fire was held in check by the building's sprinkler system.

Firefighters remained on scene for about four hours to bring the situation under control. There were no injuries reported.