No Injuries After Commercial Structure Fire in Ocala 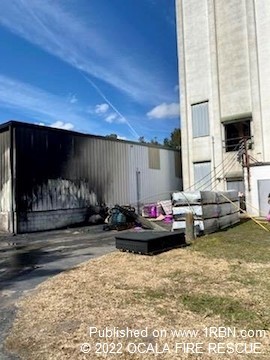 Units arrived at Ocala Breeders Feed and Supply (OBS) - a single-story commercial warehouse - to find a downed power pole and power lines with three transformers burning and fire impinging on the exterior southeast corner of the building. OBS employees were attempting to keep the fire at bay with extinguishers.

Crews from Engines 1 and 3 attacked the fire from either side, while Engines 4 and 5 supplied water from the hydrant. Rescue 1 searched the building to ensure that no employees were left behind.

Firefighters contained the fire until the powerlines were secured. The fire was under control by 12:26 p.m. Damages were contained to the exterior siding of the southeast corner of the structure.

The state warning point was notified of a transformer oil spill.