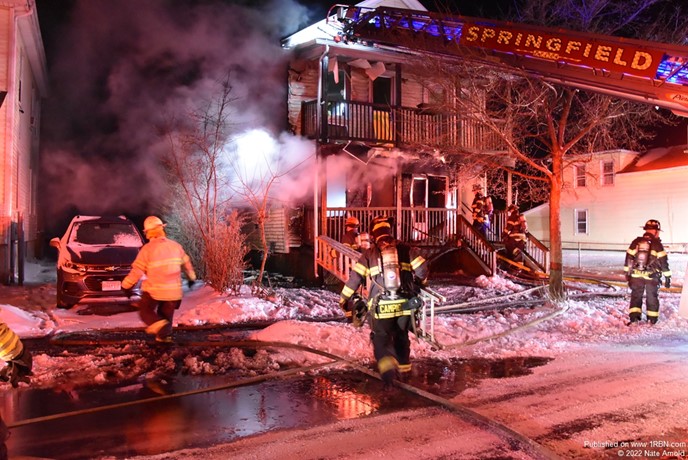 Photo by Nate Arnold Smoke pushes from the 'A/B' corner of the home as the RIT sets up a ground ladder on the 'Bravo' side as a precaution. 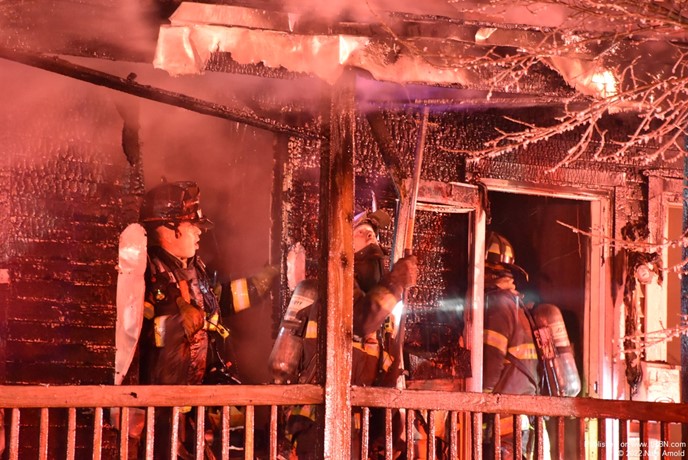 SPRINGFIELD, MA - An early-morning fire sent three residents out into the frigid cold and heavily damaged their two-story, wood-frame dwelling in the Hill-McKnight neighborhood of Springfield on Sunday, January 30th.

When the call came in at 4:30 A.M., first due companies Engine 8, Truck 2 and the Rescue Squad, were literally just two blocks away. Despite their close proximity, heavy fire was already venting from the first floor on both the 'Alpha' and 'Bravo' sides of the dwelling when crews arrived on scene.

Members worked as quickly as the snow and icy conditions on scene would allow, stretching three lines on the dwelling to attack the fire on the porch and both floors simultaneously. Displaying excellent teamwork and discipline, crews managed to knock the fire down within 30 minutes, but would spend the next two hours overhauling the building and chasing hot spots.

The temperature that morning proved to be a problem (7-degrees at time of dispatch) for companies when it came time to pack hose back on the apparatus. So much in fact that Monroe command had to notify fire alarm that there would be a delay in getting companies back in service due to difficulty in rolling the frozen hose.

The cause of the fire is under investigation by the SFD Arson Squad. All displaced residents were assisted by the Red Cross.