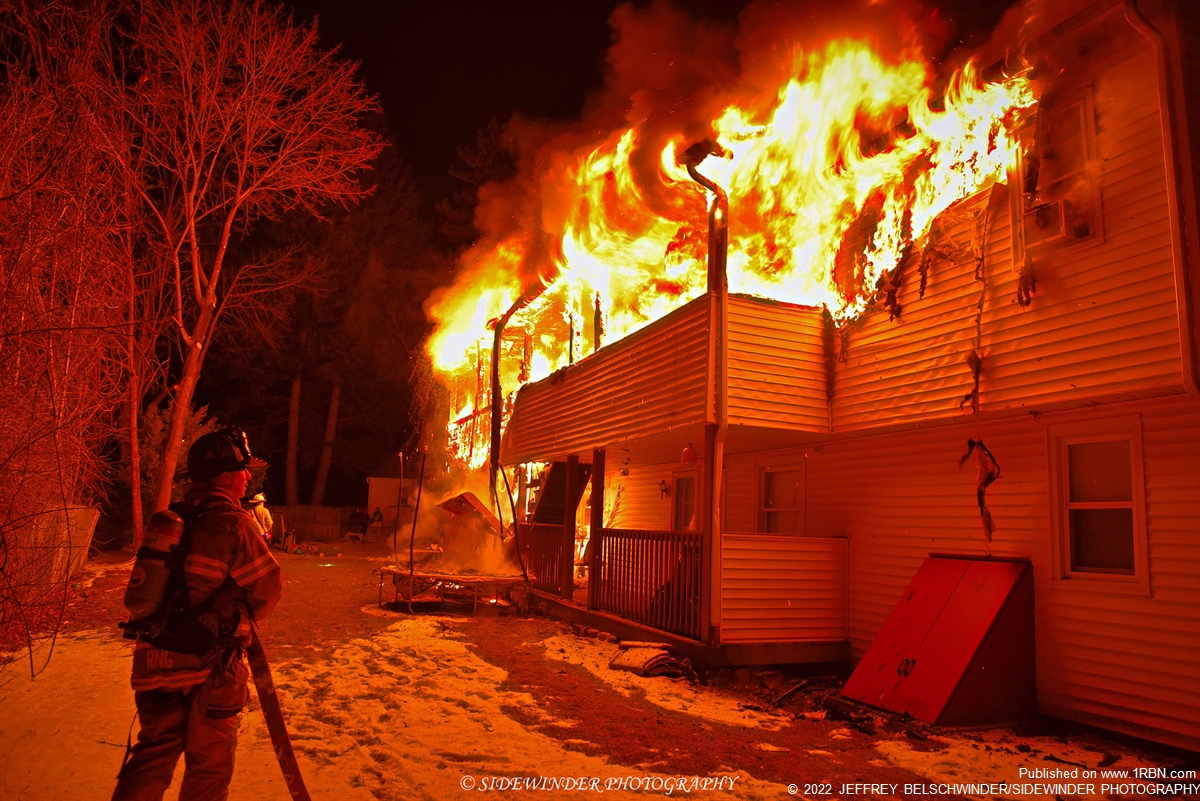 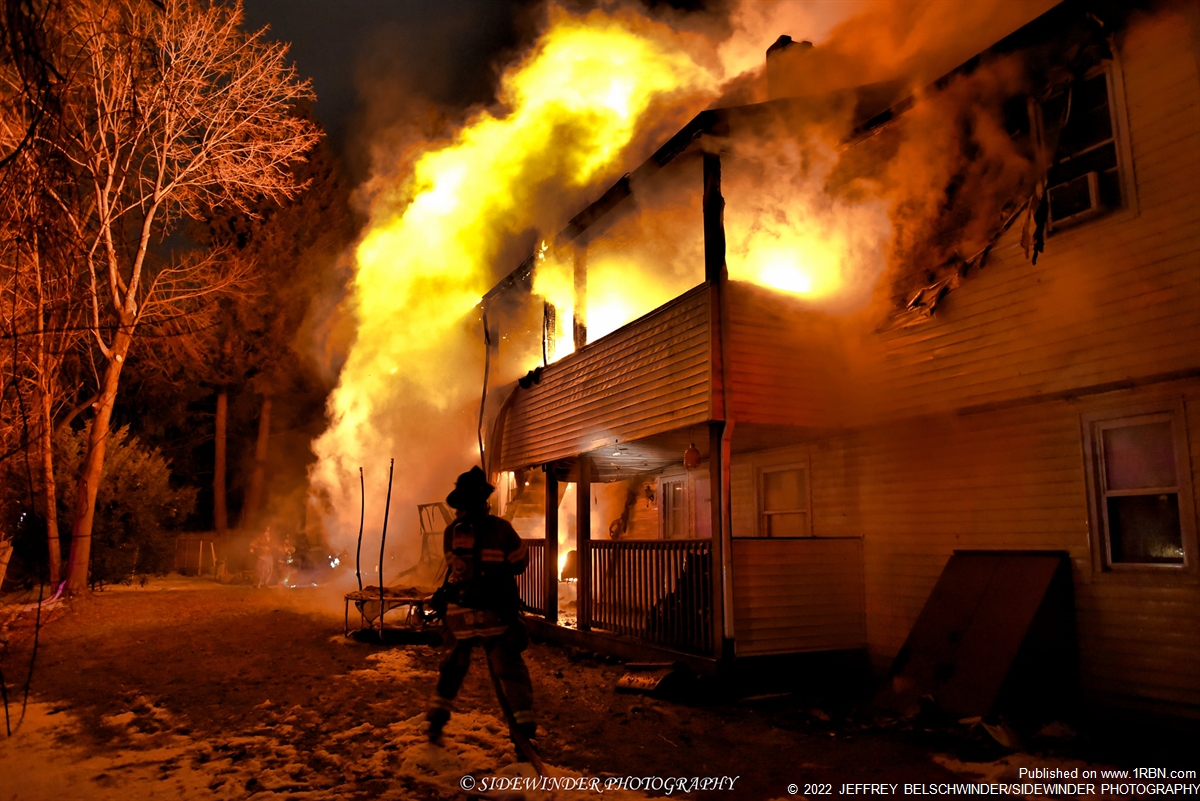 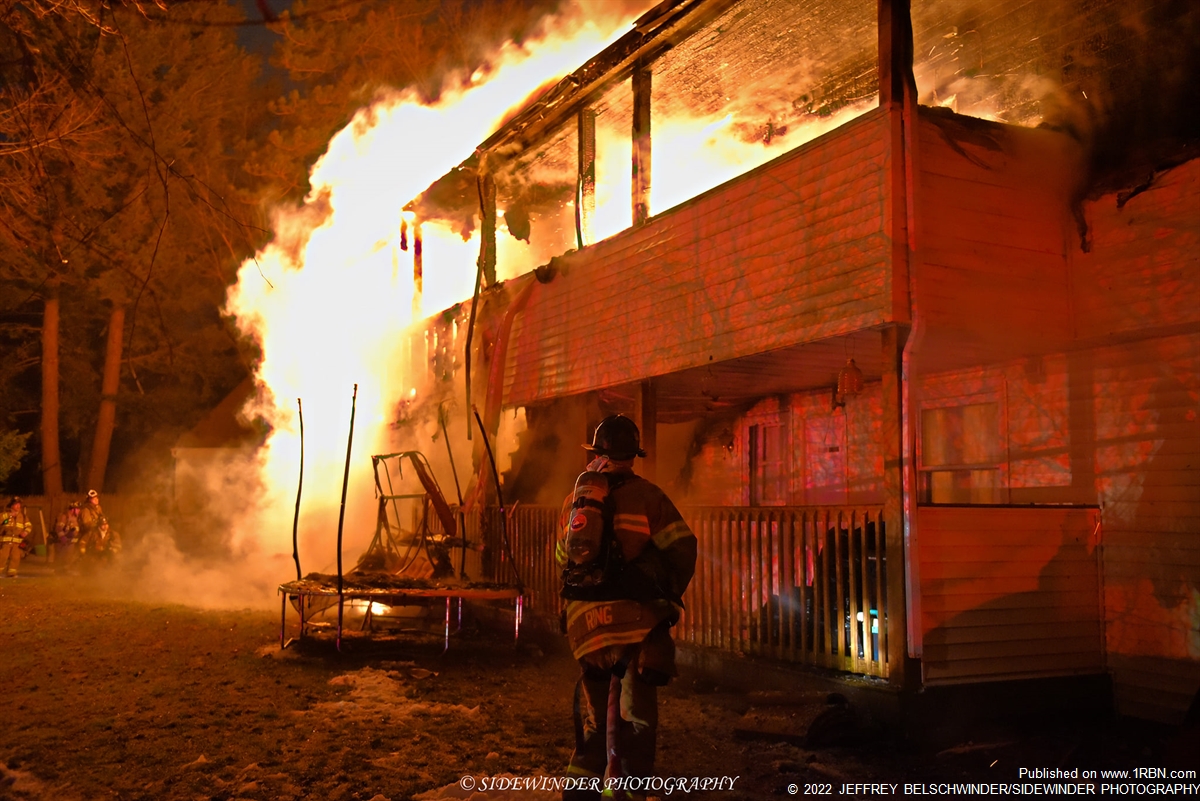 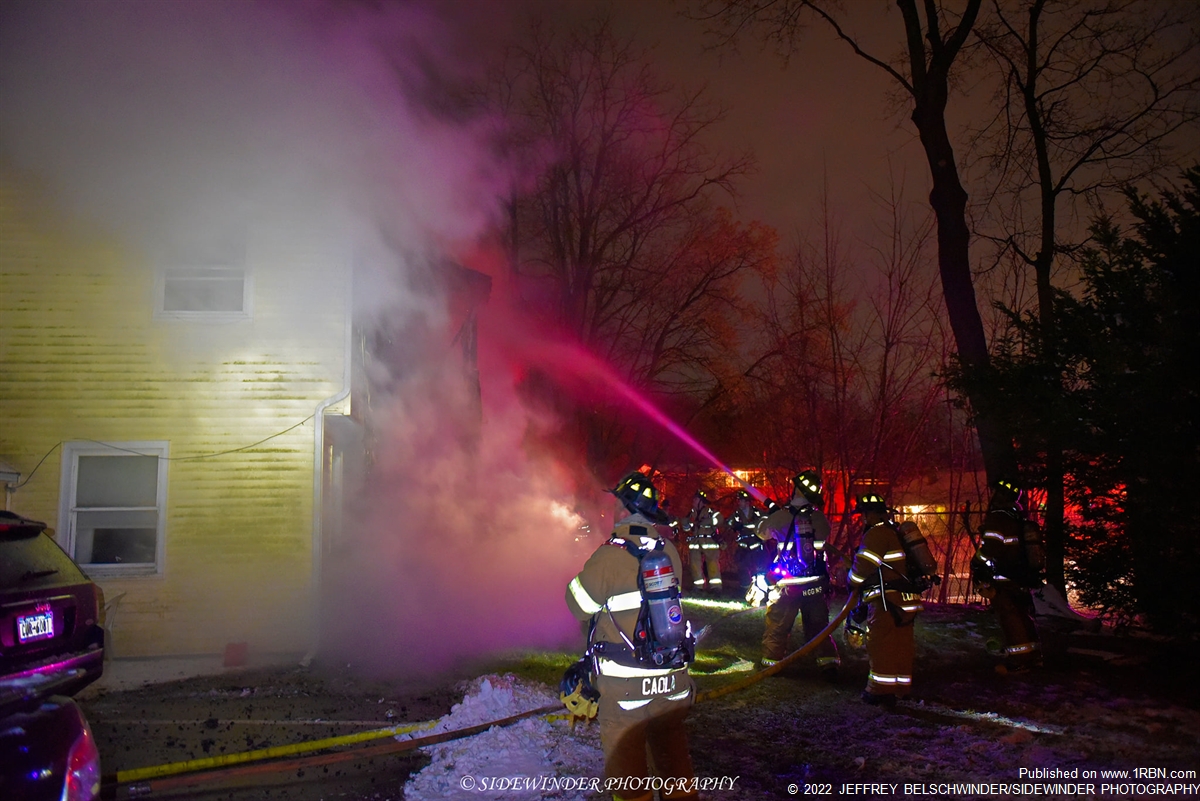 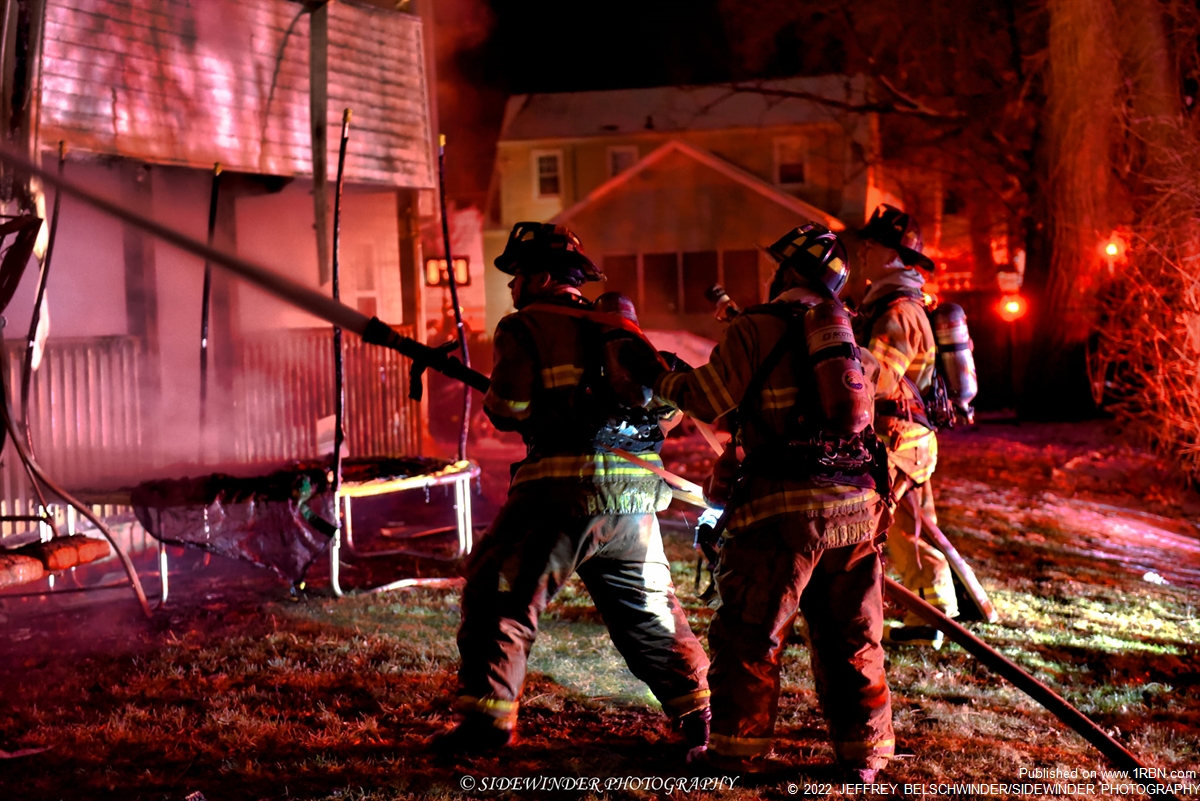 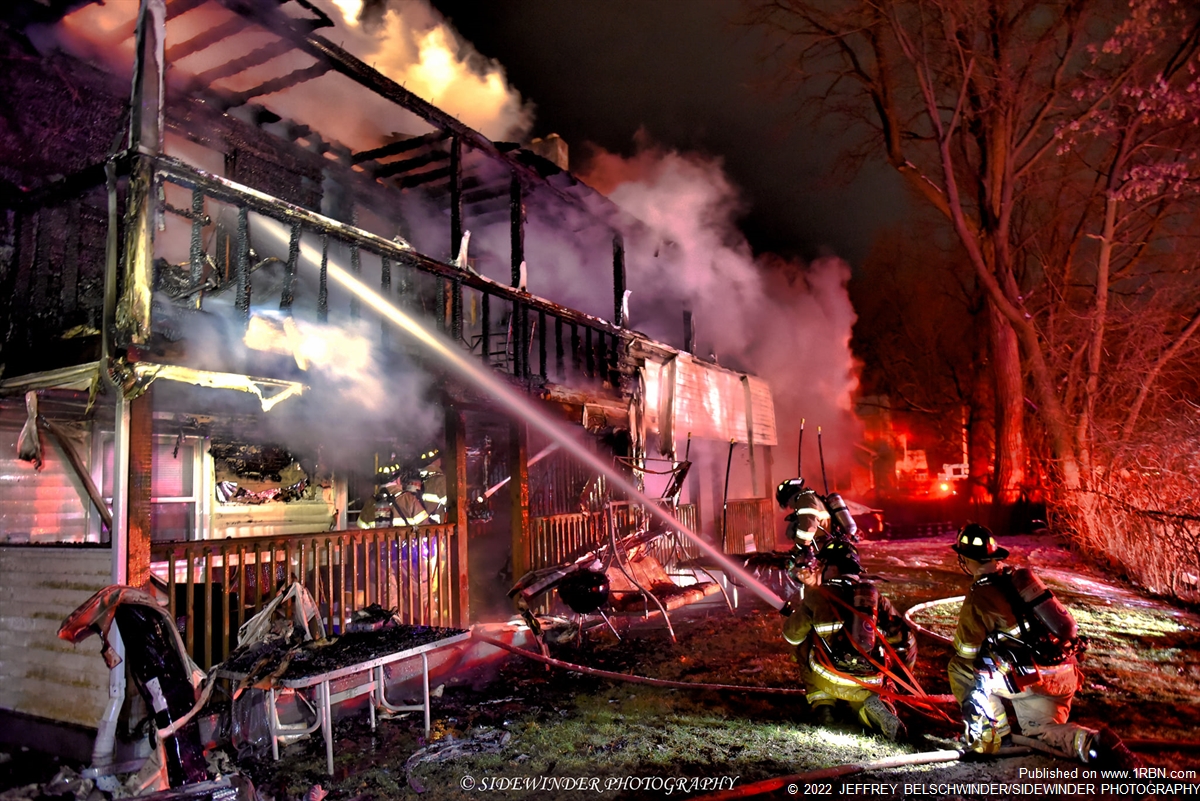 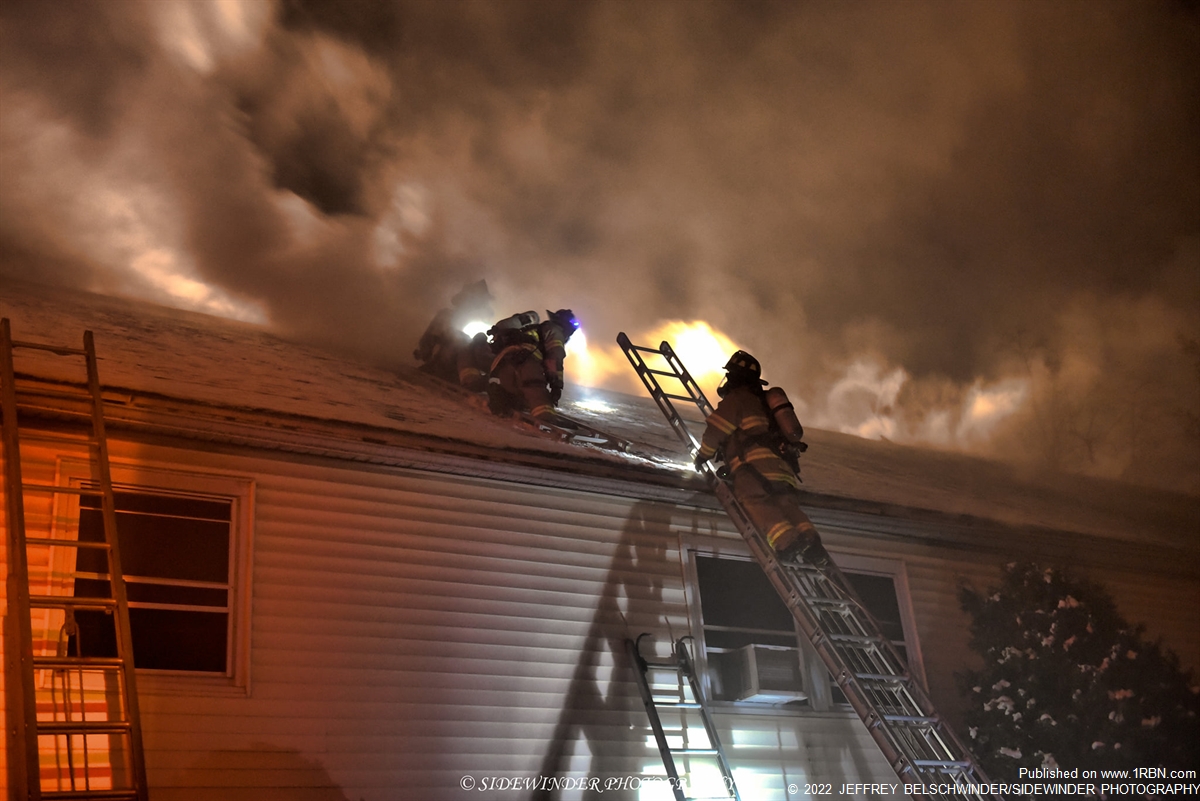 TROY, NY - On January 7th at 7:15 P.M., the Rensselaer County Emergency Communication Center received multiple calls for a reported apartment complex on fire at 5 Ahern Avenue. Engines 2, 4 and 6, along with Trucks 1 and 2, the rescue squad, Medic 4, and the battalion chief responded to the scene. Several police units quickly arrived on scene and notified the dispatcher that they had a confirmed heavily involved working structure fire and to notify the fire department.

As Engine 2 was coming up Tibbits Avenue, thick heavy black smoke pushed into the night sky with a heavy amount of embers blowing around. Engine 2 backed into the driveway of the apartment complex and firefighters immediately began to deploy multiple hand lines. As crews approached the scene from the front of the building, heavy black smoke started to push from the roof vents of the structure and fire began to roar over the top of the building. Firefighters made their way to the rear and found the back portion of the building heavily involved. They stretched multiple hand lines towards the rear of the building, but after coming up short due to the distance, they went back to grab high-rise packs to connect them to the deployed hand lines.

The battalion chief arrived on scene and declared the second-alarm, summoning the Watervliet Arsenal and city of Albany Fire Departments to the scene, but due to the city of Albany FD dealing with their own fatal fire at the same time, they were unfortunately unable to respond. Other firefighters from the additional units began to arrive on scene and immediately made entry to the apartment building to conduct a primary search to make sure everyone was out of the structure. As Troy firefighters vigorously connected multiple high-rise packs together to reach the back and second floor of the building, they began to call for water as the heavy fire condition traveled further into the roofline.

The pump operator of Engine 2 had several firefighters strip all of the hand lines from their rig and they began to pull them to the other side of the apartment complex. Firefighters from the truck company arrived and began to pull the large diameter hose off the engine to pull it back up the street to the nearest fire hydrant. Crews began to knock down the heavy fire condition in the rear of the building. The Watervliet Arsenal's truck company arrived on scene and took the rear parking lot of the apartment complex located next door. Crews cut a hole in a chain-link fence and made entry to the scene.

The operator of the Watervliet Arsenal's truck company put the ladder up in the air through the tree line and turned on their scene lights to provide lighting to the crews working in the rear, and aerial support if necessary. As firefighters began to knock down the heavy fire condition in the rear, crews made their way inside the structure where they discovered heavy fire on the third-floor of the apartment complex. Due to very cold temperatures, any droplets of water that landed on the firefighters quickly froze.

As firefighters on the third-floor began knocking down the heavy fire condition inside the structure, firefighters from the truck company and engine company made their way to the roof and created multiple vent holes to allow the heavily trapped fire, super-heated gasses and smoke to escape. Crews on the second-floor took out several windows to improve visibility for firefighters working inside, and the Troy PD asked the dispatcher to contact the Red Cross for displaced individuals that lived in the apartment complex.

Firefighters made their way into the first-floor rear portion of the structure and found fire traveling the walls. They pulled apart the walls and crews began to knock down the fire condition. As firefighters searched for the basement entrance, crews opened up the Bilko doors and discovered that the basement entrances were false doors that covered the windows in the basement. Firefighters in the rear of the building made their way up the partially burned-out stairs with a hand line and began to knock down all of the remaining fire.

As firefighters were working, multiple Troy police units on scene were requested to respond to the Big Apple Pizza on 14th Street, across from the Rensselaer Polytechnical Institute, for a male that had reportedly been stabbed in the chest. With all the City of Troy's fire apparatus on scene of the fire, and all the City of Troy's ambulances either tied up at the fire scene or on other calls, they were not able to respond to the stabbing incident, so Mohawk Ambulance Service was requested to the scene instead. Engine 1 and the Battalion Chief arrived and found that the victim did not have any stab wounds, but was suffering from a medical emergency. The victim was transported to Samaritan Hospital.

Thankfully Engine 2 was in service at the time of this fire, or it could have been a lot worse. Engine 2, which cross-staffs the medic rig, is frequently out of service and has had multiple fires in its first due district that it has not been in service for.

Firefighters on scene were able to bring the fire under control in about 40 minutes. Crews conducted a secondary search of the building and confirmed that no one was inside. Extensive overhaul of the fire building was then conducted. Exhausted firefighters remained on scene for a few more hours before being released.

The City of Troy's Department of Public Works brought in their salt truck to assist firefighters, as water froze to the ground almost instantly as it flowed from the hand lines. Fire Investigators were brought into the scene, and no injuries were reported. Multiple people were left homeless after the fire, which was later determined to be caused by a space heater. The building was a complete loss.