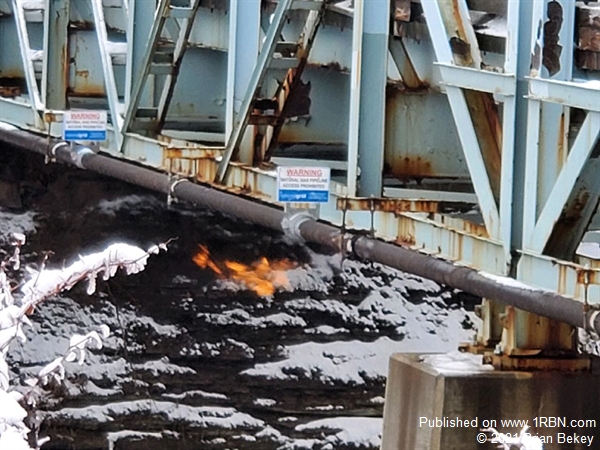 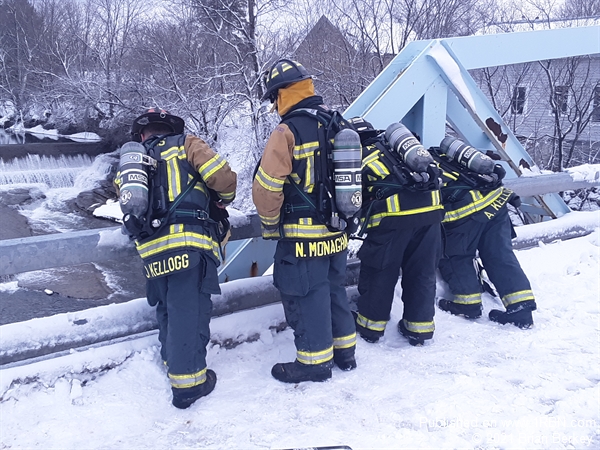 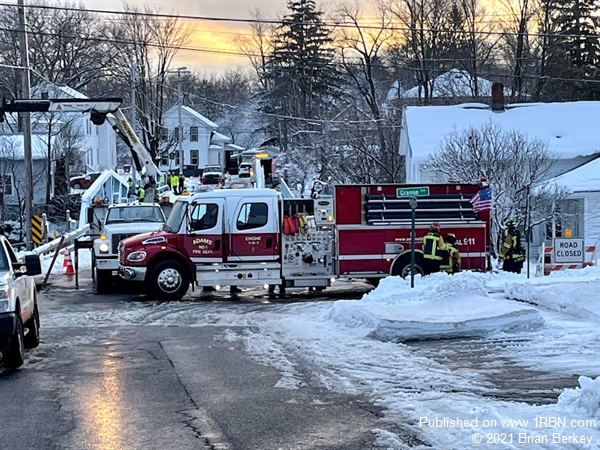 Adams, NY - At 2:30 A.M. on Sunday, January 17th, the Adams Fire Department was dispatched to an outdoor fire under the South Park St. bridge in the Village of Adams.

The bridge is a two span steel truss bridge that carries South Park St. over the North Branch of Sandy Creek. A National Grid natural gas main is fastened to the East side of the lower truss structure. The 911 caller indicated that there was a gas line in the area of the fire and the power was out. Heavy snow was falling with high winds.

Chief Brian Berkey was first to arrive on the scene and found that a National Grid primary power line had come down on the steel truss of the bridge, causing a lot of arcing and energizing the entire bridge. He also noticed an open flame under the bridge adjacent to the gas main and requested National Grid to respond with both electric and gas crews. County Highway was also notified of the situation.

National Grid advised command that an area North and South of the bridge should be evacuated as a precaution until the actual status of the gas main could be determined. Crews from both engines and the rescue began going house to house to evacuate residents. Chief Berkey moved his command post to the Adams Fire Station three blocks away and began preparations to open the station as a shelter. The Adams Fire Department Ladies Auxiliary was requested to respond to the station to operate the shelter. The shelter was set up in the station meeting room and evacuees were kept separated from responders.

Electric crews isolated the area of the bridge and restored power to the remainder of the village within a couple of hours and stood by for gas crews before repairing the lone on the bridge. National Grid responded with several natural gas crews and equipment, as well as numerous service vans which began to check the entire area for any additional gas leaks. Two serious leaks along with several more minor leaks were discovered, which were likely caused by electricity flowing through tracer wires along buried gas lines.

Chief Berkey and Mayor Philip Chatterton met with Supervisors from National Grid. Since shutting off the gas main would cause just under 200 customers to lose service in the winter and repairing the damaged gas main would likely take several weeks, it was decided the best course of action was to install a temporary gas line across the bridge deck to serve the area until the damaged main could be repaired.

Leaking gas from the damaged main was allowed to burn to consume the leaking gas. Safety crews were positioned at key gas valves in the village in case gas needed to shut off quickly. The Jefferson County Highway Department brought concrete barriers to the scene to close the bridge until the damaged gas main repairs were complete.

An engine company remained on standby with crews rotated hourly until the temporary line was completed and the fire extinguished at 4:26 P.M. The fire department returned to full service at 5:25 P.M.

National Grid gas and service crews worked through the night and well into the next day repairing and searching for any additional leaks.