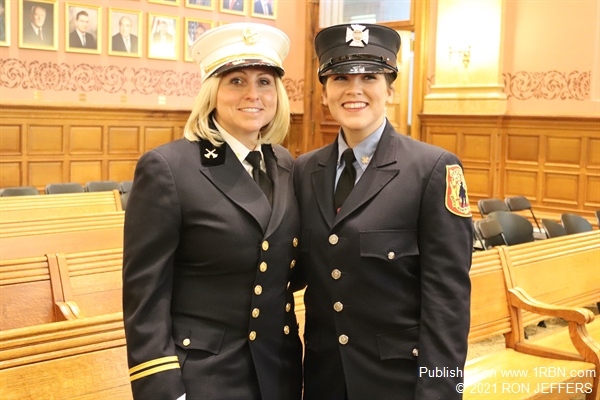 Two members of the Jersey City Fire Department, and sisters, were selected as part of a television tribute to America's first responders. “Lidia Celebrates America: A salute to First Responders,” premiered February 12th at 10 P.M. on PBS.

Celebrated chef, author and food ambassador Lidia Bastianich spent time virtually with men and women serving on the front-lines, from medical workers in New York City to firefighters in rural California. She introduced firefighters, paramedics, military personnel, police officers and medical workers to find out what motivates them, and learns what it truly means “to serve.”

Among those interviewed are Francesca and Connie Zappella, two sisters that are part of the Jersey City Fire Department. Connie became the first city female firefighter in 2003 and has worked her way up the ranks to her current position of battalion chief. Her younger sister, Francesca, was sworn in as a city firefighter on January 14th, 2020, after spending several years as a local police officer.

Lidia learned how the sisters both felt a calling to become first responders during her interview.

Lidia culminates with her favorite breakfast risotto, which she makes and delivers to the hospital workers at Holy Name Medical Center.

“A salute to First Responders” is a production of WGBH Boston and Tavola Productions. Visit pbs.org/pressroom for updates on programs.

“Almost everyone has a story about how they, or someone they know has been helped by a first responder,” said Laurie Donnelly, WGBH Executive Producer. “We are so honored to bring their incredible stories to viewers across the country.”