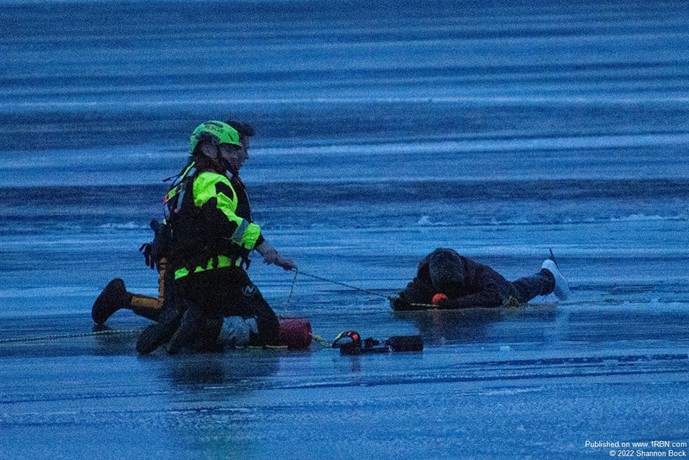 Photo by Shannon BockOfficer Paonessa and Assistant Chief Bock removing the female victim from the water. 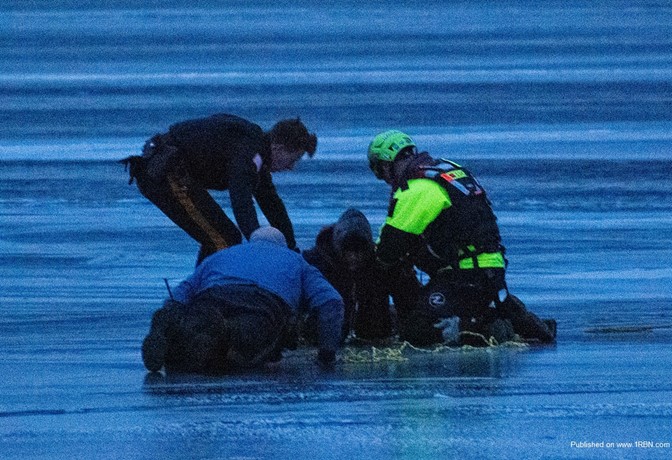 NETCONG, NJ - On Sunday, January 16th at approximately 4:56 P.M., Netcong Borough PD Officer Paonessa was dispatched to Lake Musconetcong for the report of a vehicle and person falling through the ice.

Upon arrival, there were two or three people on the ice pointing in the direction of where the person went through, about 300-yards away. As Officer Paonessa was directing people to return to shore, a male, later identified as James Best, fell through the ice 40-yards away from Officer Paonessa. As Paonessa made his way to Best, he tried to pull Best from the water. After several failed attempts, Paonessa was able to retrieve a rope from Stanhope Police Officer Robert Popelka and pull Best from the water.

A few seconds later, a female fell through the ice, later identified as Emma Ike. As Paonessa made his way to Ike, Officer Popelka was within 20-yards. Officer Popelka threw a rescue rope to Ike to hold onto. A few moments later, Netcong Borough FD Assistant Fire Chief Raymond Bock, Jr. and Stanhope/Netcong First Aid Squad Captain Derek Kuncken were able to assist in pulling Ike from the water and brought her to shore.

Netcong FD and Stanhope/Netcong First Aid Squad jointly rescued the third victim using Ice Rescue equipment, including ice rescue suits and a rescue sled. They utilized this equipment to make their way out to the initial victim who had fallen through the ice on his motorcycle. The victim was approximately 300-yards from the shoreline. The Netcong FD and Stanhope/Netcong First Aid Squad were then able to retrieve the victim, later identified as Rodrigo Oborski. Officer Popelka, Officer Paonessa, and several other first responders pulled Oborski from the icy water and brought him to the shore.

All three victims were treated at the scene by the Stanhope/Netcong Ambulance Squad, Morris County EMS, and medics from St. Clare’s Hospital. Two victims refused medical assistance, and the third was transported to a nearby hospital.