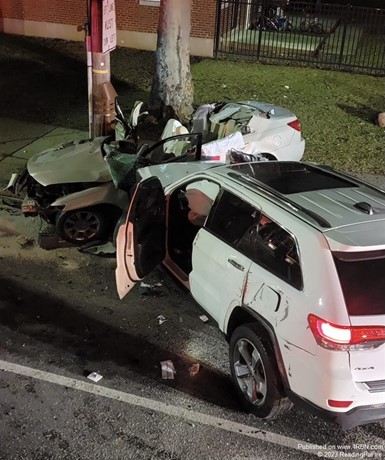 Photo by ReadingPaFireFirefighters removed the roof of a sedan with three trapped patients after an SUV pushed the vehicle into a pole. 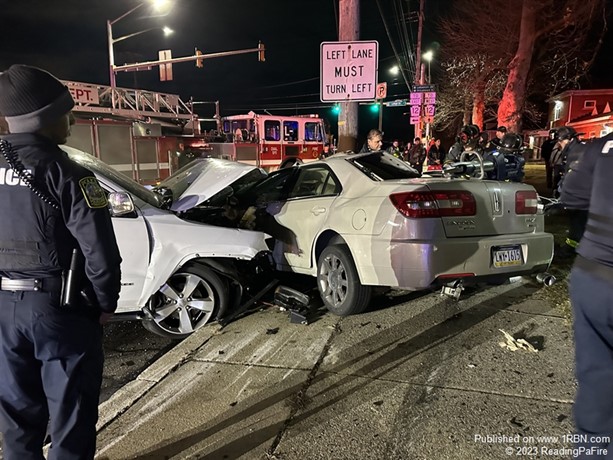 Photo by ReadingPaFireThe T-bone collision trapped 3 people in a sedan.

At 0512 hours the rescue assignment was sent out for a MVA with possible entrapment at the intersection of Schuylkill Ave and Lehigh St in the City of Reading. Engine 7 arrived on scene to find a T-bone style collision and reported 3 victims trapped in one car. With that report 2 additional Medics were dispatched to the scene as crews began stabilizing the vehicle for extrication. Upon arrival of the rescue and ladder company tools were immediately placed in service on the passenger side of the vehicle. As the rear passenger door was removed crews were able to extricate thr 1st victim from the rear seat. A 4th Medic unit was requested to scene to evaluate a 4th patient. Firefighters worked to removed the front passenger door along with the roof of the vehicle to make access to the 2 other victims. Extrication was made difficult as the vehicle that got T-boned was pushed into a telephone pole. Once the roof of the vehicle was removed the driver was able to be extricated. The final victim was extricated just a few minutes later at 0553 hours. All 3 entrapped patient were transported to Reading Hospital while the driver of the other vehicle was taken into custody by Reading Police Department. An extensive fuel spill was covered prior to fire crews clearing the scene.