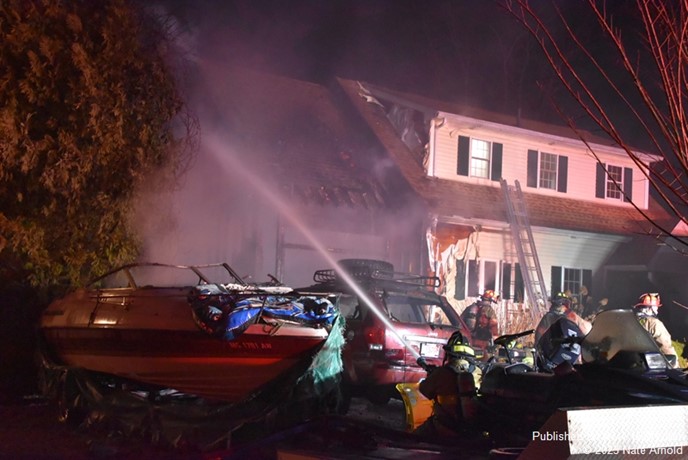 Photo by Nate Arnold View from the 'A/B' corner at 82 Dunn Rd. 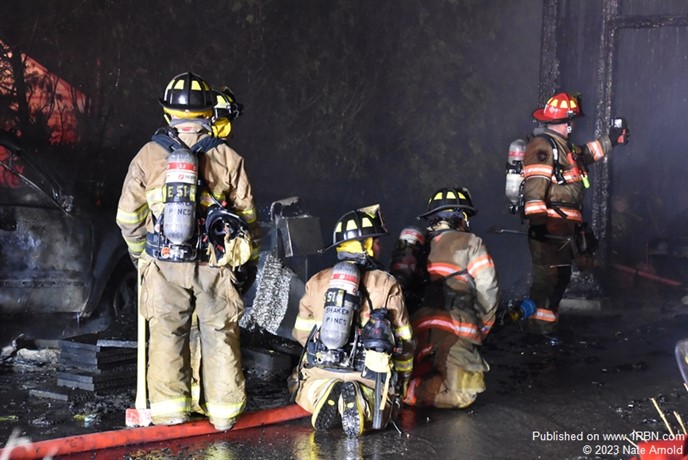 LONGMEADOW, MA - What should have been a by-the-book garage fire on the night of January 7th brought with it several unexpected and unwanted challenges for the members of the Longmeadow Fire Department, and ended up requiring mutual aid from both Massachusetts and Connecticut.

On duty Longmeadow firefighters were toned out by WESTCOMM PSD to respond for the reported structure fire at 82 Dunn Rd. at 8:30 P.M. The reported address is in one of the few sections of this affluent, suburban bedroom community that can best be described as "on the other side of the tracks" literally. In order to reach this rural portion of town, one has to cross a CSX at-grade railroad crossing. In addition to being on the outskirts of town, this portion of Longmeadow has the added burden of having fire hydrants spaced over 500-yards apart; so a garage fire could well be expected to pose some challenges in and of itself. Now, let's add in a gas grill propane tank BLEVE just as the first apparatus arrives on scene, and a water main break that rendered the hydrants closest to the fire useless.

Anyone would assume that these challenges would result in the total loss of the garage and the attached two-story, wood-frame, single-family dwelling. However, good line placement, good luck and an excellent mutual aid response were on the LFD's side this night. With companies responding to the scene from East Longmeadow, MA and Enfield, CT in good time, a positive water supply was re-established with a relay pumping operation and the fire damage was contained to the garage, a boat and an SUV, with the home only receiving some smoke, water and some radiant heat damage.