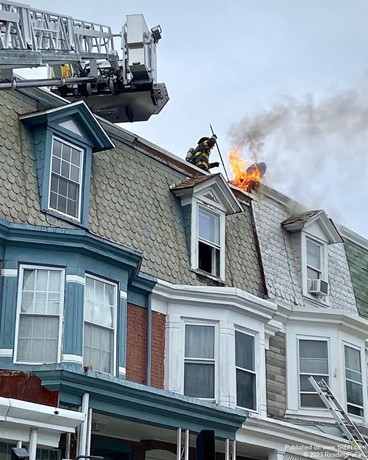 Photo by ReadingPaFireThe fire was knocked down and a short handline off the bucket of Tower 1 was used for mop-up.

At 0901 hours Box 601 was transmitted for reports of smoke and flames coming from the roof of a residence at 326 S 17.5 St. Engine 1 arrived on scene confirming smoke and fire showing from the 3rd floor dormer. A working fire was declared as firefighters stretched a 1 3/4” line into the dwelling. As crews made access into the house Tower 1 set up the main to the roof. Interior crews began opening the ceiling and were able to knock down the fire as a 2nd line was stretched to the adjoining residence. Engine 1 supplied Tower 1 so firefighters could use the short handline off of the bucket to help mop-up the fire. Car 6 confirmed there was no extension to the exposure dwelling and the fire was placed under control. Firefighter countinued to overhaul part of the 3rd floor of the fire building until they confirmed the fire was out. Reading Police also responded as Engine 5 was struck by a hit and run driver while on the scene. The scene was turned over to the Fire Marshal’s Office for investigation as other companies were clearing.