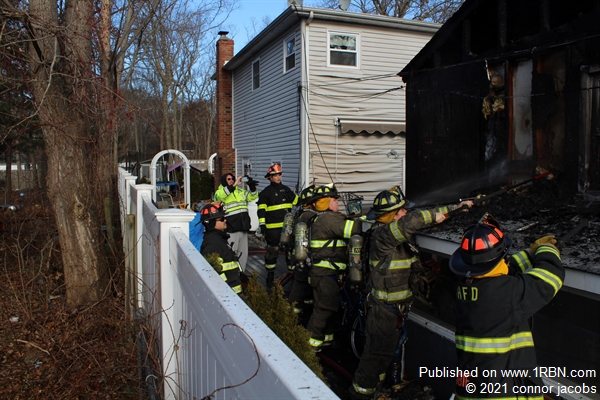 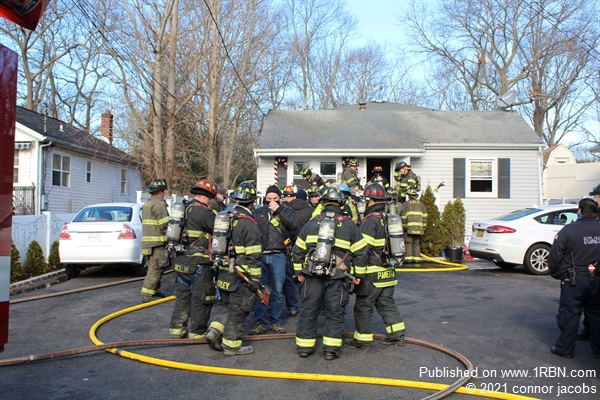 Photo by connor jacobsFirefighters staging in front of the fire building

Shirley, NY - At approximately 10:15 A.M. on January 7th, the Brookhaven FD along with Shirley Community Ambulance Co. were toned out for a reported residential structure fire on Victory Ave.

First arriving Brookhaven 1st Assistant Chief Anthony Verni was advised by Fire-Com that there was reported flames showing from the side of the house. On arrival, Chief Verni radioed back to Fire-Com advising that he had a working fire and to start his 24 plan, which was the Mastic, Mastic Beach, Manorville, Yaphank, Center Moriches, and East Moriches Fire Departments.

The first due engine that was on the road was East Moriches Engine 4 and when they got on scene they immediately pulled two hand lines and went to work. The second due engine was Brookhaven Engine 8 and they hit the hydrant and hooked up the supply line to the first due engine.

Firefighters went to work putting water on the fire and rescued at least three dogs and some other animals from the home. The Center Moriches FD responded as the RIT while the Mastic and Yaphank FD's were requested for an engine. Firefighters were able to put a good stop on the fire before it spread any further.

The Brookhaven Town Fire Marshal was requested to the scene as well as the Suffolk County Arson Squad to determine the cause of the fire. Firefighters were able to bring the fire under control about 15 minutes after arriving on scene and were back in quarters within two hours. There were no reported injuries.