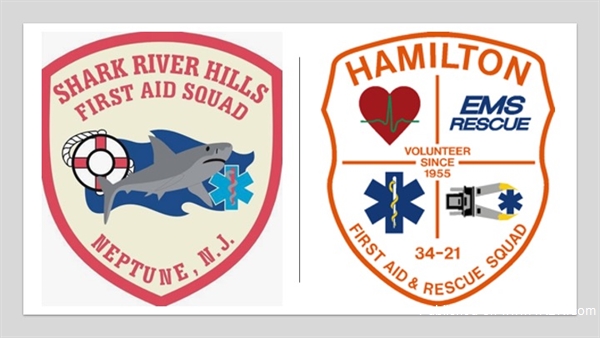 The merger has been months in the works and is a reflection of the changing demographics, the evolving volunteer EMS workforce and a dedication to the needs of the community by both squads, says Bascom.

“To maintain the best possible community service you must change with the times,” says Mike DiLeo, captain of Hamilton First Aid & Rescue Squad. “Increased call volume and responsibilities, along with changes in the way the community volunteers, require changes to the way we deliver prehospital care. The constant improvements in technology and training provide for better prehospital care and outcomes. These must be combined with the ability to provide timely, quality care.”

“They recognized the need and came up with a plan to make sure their residents get the coverage they expect when they dial 911 for help,” says Bascom.

The merger completes a circle of sorts. Hamilton First Aid was launched on January 1, 1956 as a way to meet the growing needs of the Hamilton section of Neptune Township. The squad launched with help from Neptune First Aid, which loaned Hamilton a 1939 La Salle ambulance. In 1960, Hamilton First Aid & Rescue Squad bought land on Rt. 33 and built its own headquarters. Then, 50 years ago in 1970, members of Hamilton created the Shark River Hills First Aid Squad. Now, together, Hamilton and Shark River Hills will become one operating under the the Neptune Township Emergency Medical Services umbrella, a career and volunteer operation, which also includes the Ocean Grove First Aid Squad and Neptune First Aid Squad. Neptune Township Emergency Medical Services employees career EMS providers to respond to calls Monday through Saturday from 6 AM to 6 PM. Volunteer responders cover the rest of the hours and all day Sunday.

“Hamilton First Aid & Rescue Squad had a strong 65 years of service,” says Bascom. “They have an illustrious history responding to local calls and some of the major disasters that have hit this area, including Superstorm Sandy and participating in the response to 9/11.”

Initially, Bascom says Shark River Hills First Aid will provide service to the Hamilton portion of the township by operating a crew out of the Hamilton First Aid building at 3600 State Route 33 in Neptune.

Bascom also says the township is early in the process of developing an extensive volunteer recruitment and retention program to enhance the membership of the Neptune Township EMS operation across the board.

As for residents of the Hamilton section of town, Bascom says the expectation is the change from Hamilton First Aid & Rescue Squad to Shark River Hills First Aid Squad will be seamless and undetected by most residents.

“The merger will ensure the residents continue to get the best emergency medical service provided by highly trained members when they need it, whenever they need it,” says Bascom. “The combination of these two organizations is a good thing for our community, for the membership of these two legendary EMS operations, and for the future of volunteer EMS in New Jersey.”

To learn more about how you can become a member of the Shark River Hills First Aid Squad visit www.srhfas.org or follow SHFAS on Facebook at https://www.facebook.com/SRHFAS/.