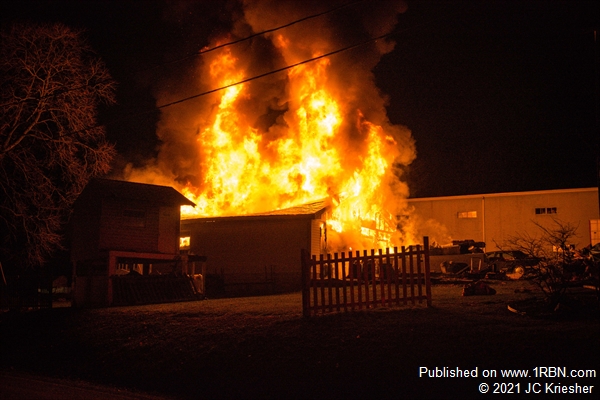 Photo by JC KriesherFlames shoot high into the sky along Main Street in Nuremberg, Schuylkill County, as firefighters begin to attack the blaze. 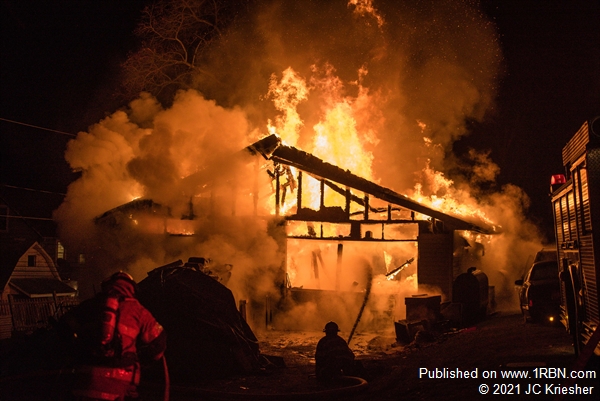 SCHUYLKILL COUNTY, Pa. – Firefighters were called out at 12:40AM on Wednesday, December 30 for a reported garage fire at the intersection of Mahanoy and Pine Streets in the Village of Nuremberg, North Union Twp.. Fire Districts 19 (Nuremberg-Weston) and 9 (Sheppton-Oneida) were due with units from Luzerne County (177 – Sugarloaf)

Deputy 19 was immediately on-air reporting a bad address as he found the fire at the intersection of Main Street and School Street. The Deputy assumed command, reported fire through the roof and requested two additional tankers. Tankers from Shenandoah and Ringtown were dispatched.


Engine 19-10 pulled past the scene to the intersection and stretched a blitz fire. Truck 19-20 took the driveway and set up for master stream operations while additional handlines were stretched. Tankers 19-30 and 19-31 dropped a portable pond on Mahanoy Street for 19-10 to supply the scene. Engine 9-10 was directed to the Weston Dam for a fill site.


As tankers were slow to respond, additional tankers from Hazle Township and Harwood were dispatched and Command requested Squrt 64-20 from Shenandoah for manpower.


Firefighters were able to bring the flames under control within twenty minutes.


Command began to release mutual aid tankers before 2AM and the fill site was also broken down. The remainder of the alarm aside from District 19 was released shortly after.

The cause of the fire remains under investigation.