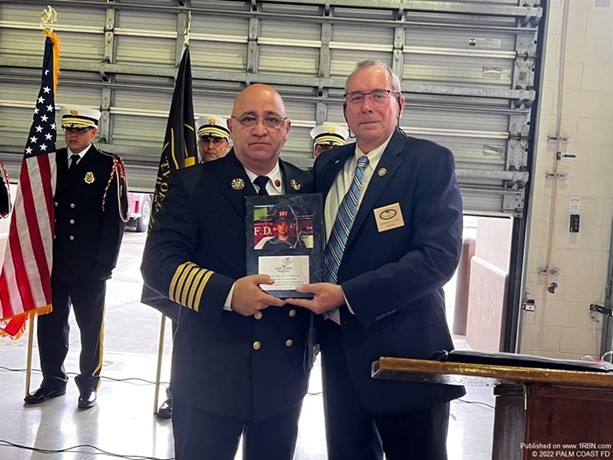 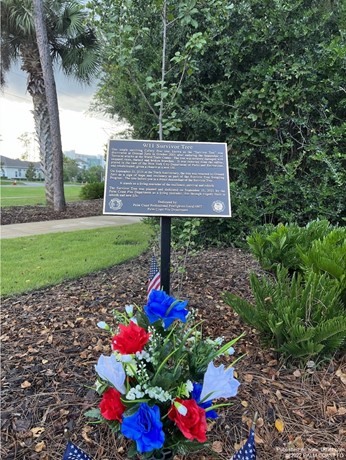 The Palm Coast Fire Department hosted a September 11th Remembrance Ceremony, commemorating the 21st Anniversary of the September 11th Terrorist Attacks. The ceremony was originally scheduled to take place at Heroes Memorial Park but was moved indoors to Fire Station 21 at 9 Corporate Drive due to a severe thunderstorm in the area.

At last year’s ceremony, the Palm Coast Fire Department received a 10-foot seedling of the Survivor Tree from the 9/11 Memorial Museum in New York City. A Callery pear tree became known as the “Survivor Tree” after enduring the September 11, 2001, terror attacks at the World Trade Center. This year, the Palm Coast Professional Firefighters Local 4807 purchased and dedicated a bronze memorial marker that has been installed at the tree. The marker nobly establishes our community’s unwavering commemoration of both the horror and the hope that was spawned on September 11, 2001. This year’s ceremony celebrated the legacy that the Survivor Tree from the World Trade Center has, to now offer shade to those in Palm Coast.

“I’d like to imagine that one day, this tree may bloom 2,977 new leaves, one for every loving soul who lost their lives on 9/11,” said Palm Coast Mayor David Alfin. The ceremony also recognized the impact that local first responders make every day in Palm Coast and Flagler County. This past May, the City of Palm Coast hosted a Tunnels to Towers 5K Race in Central Park. The Tunnel to Towers Foundation presents participating organizations with a ‘Follow the Footsteps’ Award. This award is intended to be given to a community member who exemplifies leadership and willingness to lend a hand wherever needed, and who has had a tremendous impact on the community. Mayor Alfin presented this award to Fire Chief Jerry Forte.

“Beyond the scope of the Fire Department, Chief Forte has gone above and beyond the call of duty on more than one occasion,” Mayor Alfin said. “Anyone that knows Chief Forte would attest to his commitment to excellence and his dedication to public service. Chief Forte is someone who, for 32 years, the residents of Palm Coast have been able to continually count on to do whatever needs to be done to get the job done.”

Chief Forte, who became emotional at the time he received the award, said “I’ve tried to lead the best I can because I never want to let them down.” In accepting the award, Chief Forte emphasized the importance of legacy. “We call next-generation firefighters ‘legacy firefighters’ as there is no better way to carry on an organization than with the children of the members that have served in the past. Today we will remember those who lost their lives, but if given the opportunity to ask those who have passed, they would want us to celebrate their children’s career and their willingness to carry on with the family business the best way they know how.”

The children of some of the lost firefighters from 9/11 have now become firefighters of New York City Fire Department (FDNY) and continue to serve with honor and dignity. The FDNY has 65 “legacy” employees from fallen firefighters as of September of 2021 with 13 more graduating in 2022— these are the sons and daughters of first responders killed in the terror attacks that are now the next generation of the City’s “Bravest.” Chief Forte remarked that “the Palm Coast Fire Department can celebrate legacy firefighters with a grateful appreciation of watching the accomplishments as we see our children follow in our footsteps.”