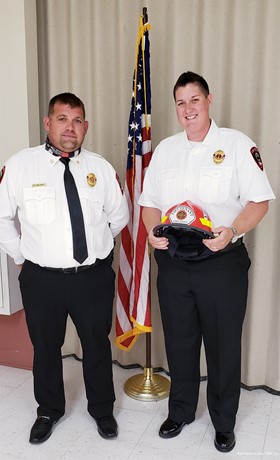 During a ceremony held by Pembroke Fire Department to celebrate members years of service and other notable achievements, Virginia "Ginger" Glover was officially promoted to the rank of Lieutenant. She was described as dependable, reliable, and a well respected member of the organization. Joining Pembroke Fire Department three years ago, Ginger has worked diligently in assisting with training and providing quality services to the citizens of the city all while encompassing a positive outlook for the future. Officially being pinned and presented the honorary red helmet by Fire Chief Peter Waters, Lt. Virginia "Ginger" Glover became the first female officer in Pembroke Fire Department's history. Congratulations Ginger!