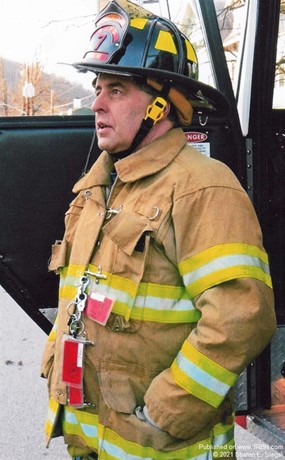 Photo by Sharon E. SiegelForty-one-year PJFD Firefighter Rob Worden is pictured on scene at a house fire at the corner of Mary St. and Ferguson Ave. in March of 2012. 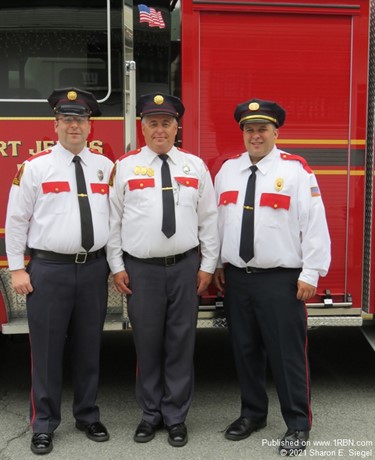 Photo by Sharon E. SiegelForty-one-year PJFD firefighter Rob Worden is pictured with his sons Justin and Rob during Port Jervis Fire Department’s 166th Inspection Day Parade in 2016. The parade was not held in 2020 due to Covid 19 Pandemic guidelines, but returns for the 170th time on July 10, 2021. 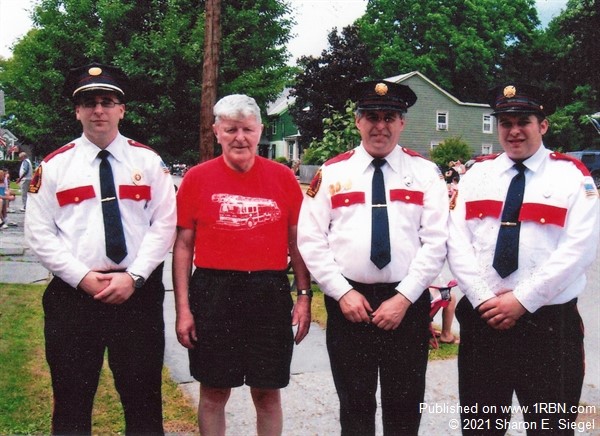 Photo by Sharon E. SiegelRob Worden (second from right) is pictured with his son Justin Worden, father Bob Worden, and son Rob Worden during a past Port Jervis FD Parade Day in July of 1984, which was then the department’s 134th consecutive Annual Inspection Day Parade. The parade was not held in 2020 due to Covid 19 Pandemic guidelines, but returns for the 170th time this year. 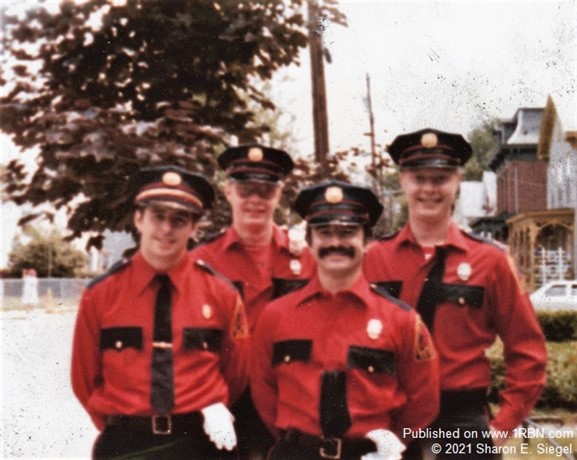 Photo by Sharon E. SiegelRob Worden, the late Bob DeVries, Fred Lomondo, and Rich Devries are pictured with their company during Port Jervis’ 134th Annual Inspection Day Parade in July of 1984. The parade was not held in 2020 due to Covid 19 Pandemic guidelines but returns for the 170th time this year. 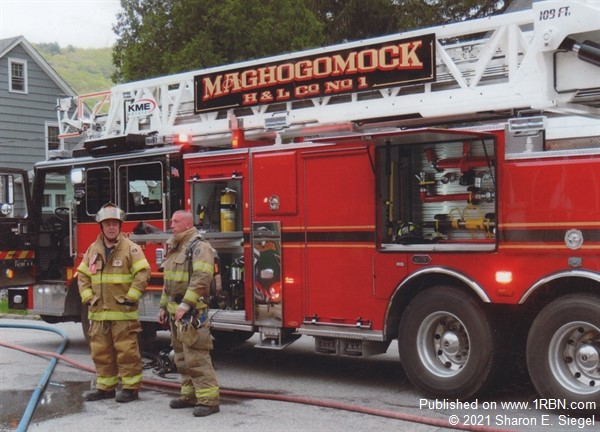 Photo by Sharon E. SiegelRob Worden and Rob Donahue on the scene of a basement fire on Francis Street in Port Jervis in May of 2019. 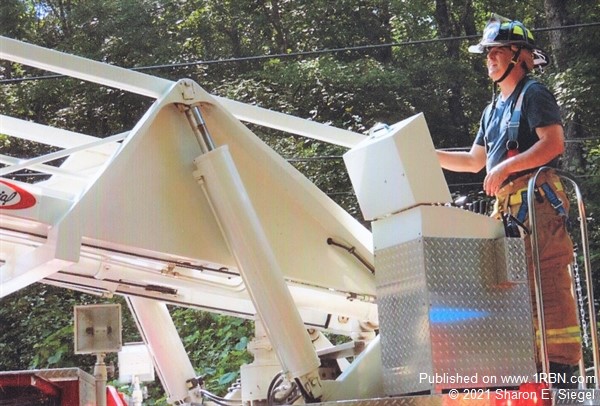 Photo by Sharon E. SiegelRob Worden operates his company’s (Maghogomock Hook and Ladder Company’s) ladder truck at the scene of a fire in Cuddebackville, NY in 2012. 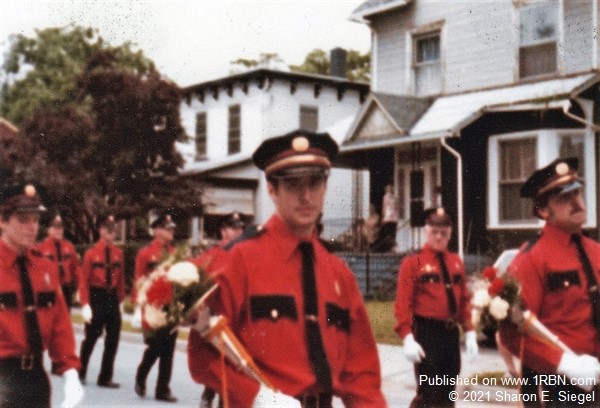 Photo by Sharon E. SiegelRob Worden is pictured during a past Port Jervis Fire Department Parade Day in July of 1984, which was then the department’s 134th consecutive Annual Inspection Day Parade. The parade was not held in 2020 due to Covid 19 Pandemic guidelines, but returns for the 170th time on July 10, 2021.

Photo by Sharon E. SiegelRob Worden (front, left) is pictured marching with his company (Maghogomock Hook and Ladder Company) in July of 2017 during Port Jervis Fire Department’s 167th Annual Inspection Day Parade. The parade was not held in 2020 due to Covid 19 Pandemic guidelines, but returns for the 170th time on July 10, 2021.

Worden joined Port Jervis Fire Department when he was 24-years-old, and has continued to respond regularly as an active member of the department through present.

Born in Port Jervis on March 23, 1956, Worden recalls knowing that Maghogomock Hook & Ladder Company was the right company for him as soon as he decided to join Port’s fire department in 1980. It was two of his friends (twin brothers) that gave him the idea to become a firefighter, the first in his family – but not the last.

“My friends Bob and Rich DeVries encouraged me to join the fire department,” Worden recalled. “I remember we were at an event, and they said they had to leave early because they were being voted in as firefighters that evening.”

Worden said just as he was inspired by his friends to join, he would like to believe he inspired his sons Rob and Justin to do the same. Both joined his company as soon as they were old enough to do so.

The Wordens are among many families who continue to serve as volunteer firefighters for their hometown. While some of those who were active when he joined are no longer as involved, and declining membership overall is a concern, Worden has many fond memories of his years in the department and intends to remain active as long as possible.

“We still have a great crew! Firefighting has changed for me personally because I am no longer an interior firefighter. I am currently the chief driver and have been a driver since 1991,” Worden said. “I love what I do and feel I am contributing by serving as a member of the fire department.”

Some noteworthy calls come quickly to mind of his years as a firefighter. These include a response to his own grandmother’s house at the corner of Owen Street and Jersey Avenue.

Other calls include the Colonial Inn fire in 2002. This was a multi-alarm blaze in a historic canal-era multi-level building which was fought in two-degree weather. More than 30 people lived in multiple rooms in the 1832 three-story inn, but no injuries were reported during the difficult overnight battle to extinguish the blaze. In 1993, Station Nine (now the Erie Hotel) made Worden wonder if it would be able to be saved.

Worden finds serving as a volunteer firefighter to be rewarding and recommends it for anyone with an interest and willingness to give the time and commitment it requires.

“Time and commitment are very important, and learning everything that is available through training,” Worden said.

As this year’s Parade Grand Marshal, Worden is being honored for his long and dedicated history of service as a firefighter, and as an officer and leader in his company. He has served as a driver from 1991 through present, and as 2nd Lieutenant, 1st Lieutenant, Captain, President, and also currently as Treasurer.

While he does not have official department level duties, he has helped with the Fireman’s Day Parade for the past four years. He finds serving his community as a firefighter, and being involved with fundraisers, parades, etc., to be very rewarding and intends to remain active for as long as possible.

Worden has the support of his family in all he does, something he is grateful for.

“My sons Rob and Justin, daughter-in-law Emily, and two granddaughters Rosalie and Eleanor are proud of the time I’ve spent in the fire department. They have been there for me 100%, knowing that when the pager goes off, I am out the door,” Worden said.

Worden, who has dedicated the majority of his life being of service with the fire department, is always available for whatever needs to be done.

When this year’s parade kicks off, he will be thinking about the years he watched the parade as a child and teen, and the many years he has marched in the parade with Maghogomock Hook & Ladder Co.

Worden will have both of his sons riding with him in this year’s parade, along with his lifelong friend and fellow firefighter, Rick DeVries.

“It is an honor to be chosen as Grand Marshal for my company, and I am proud to be part of Port Jervis Fire Department,” said Worden.