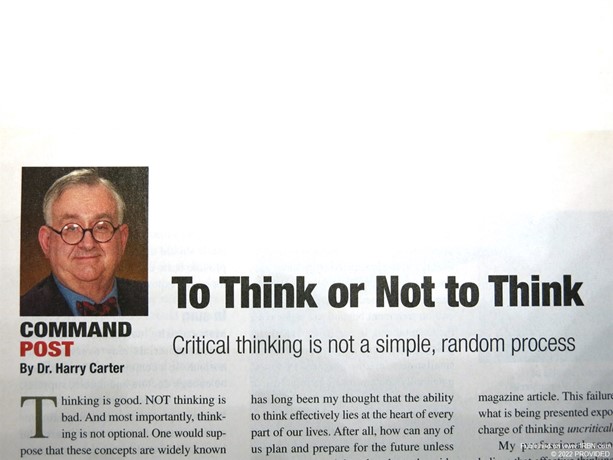 Dr. Harry Carter wrote a popular column in Firehouse Magazine for many years.

Dr. Harry Carter earned many degrees during his life, and he used his education and field experiences to improve fire safety operations on a national basis.

Carter spent 26-years with the Newark Fire Department, retiring in 1999 with the rank of battalion chief. During his career, he not only worked on some of the busiest companies, that saw plenty of work, but he held many responsible positions.

During his tenure with the N.F.D., Carter served as chief of training, commander of the hazardous materials response team and administrative assistant to the chief of department.

In addition, he was a volunteer firefighter with the Adelphia Fire Company in Howell Township. He was chief of that company in 1991. Chief Carter also served as chaplain for Adelphia and the East Freehold Fire Company in Freehold Township.

His longtime presence in the New Jersey and national fire service included writing fire science books, offering lectures at numerous national fire expositions and writing fire safety and education columns for numerous publications. One of his most popular columns appeared in Firehouse Magazine, called “Command Post”. He also submitted columns to 1st Responder News in the early days of this publication, as the newspaper grew.

Possessing professor style eye glasses and a bow tie, you might have reservations at one of his lectures, feeling like you were back in grammar school, at first. That didn't last. Dr. Carter was a down-to-earth guy and told many down-to-earth, on the line stories, that firefighters could relate to. And of course, find many amusing.

Dr. Carter was called an icon, mentor, instructor and friend. Another severe loss to the national fire service.