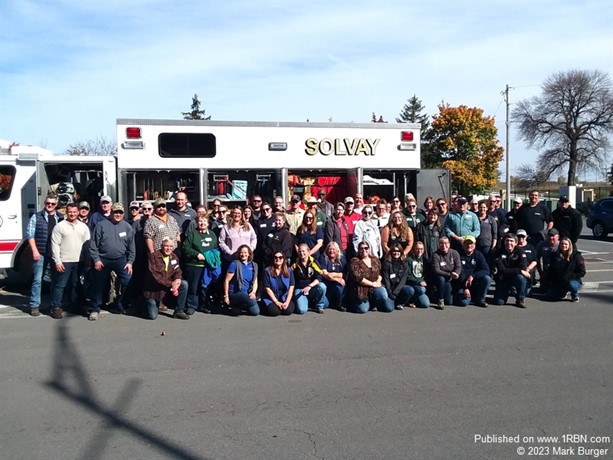 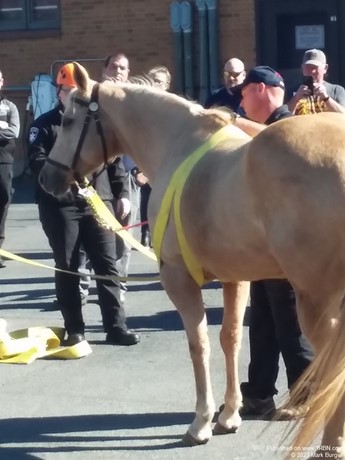 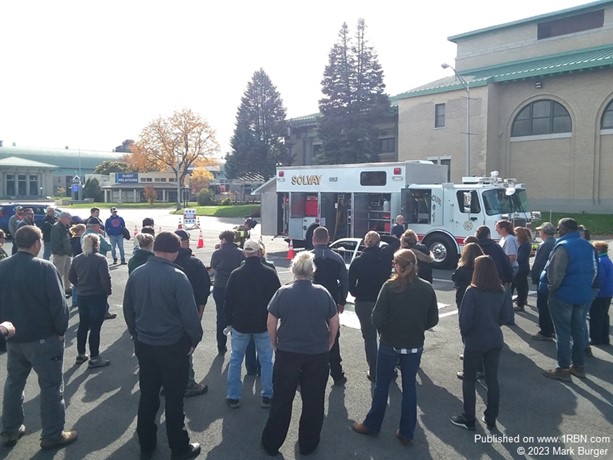 Photo by Mark BurgerClass learning about the resources of a rescue truck. 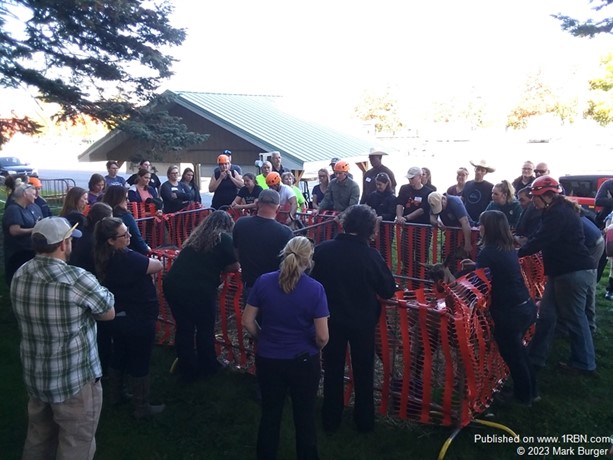 Photo by Mark BurgerClass learning “hands on” about goats. (Thank you to Caitlyn Hanlon!) 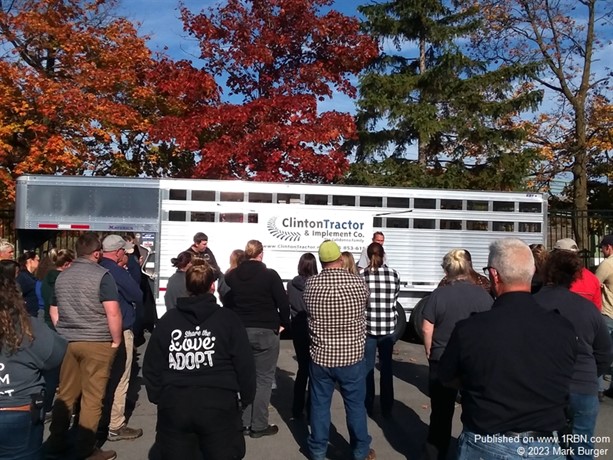 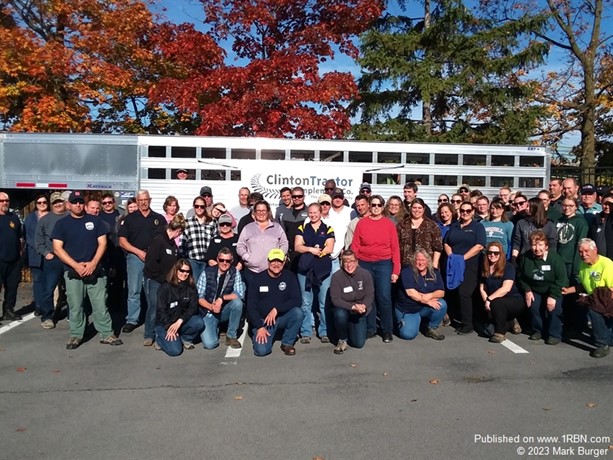 The worst nightmare a horse owner could imagine is to find yourself in a trailer accident or barn fire, and have no one around to help you save your horse's life. In our world of wildfires, hurricanes, floods and other natural disasters, there's always the chance that something bad will happen, but we want confidence that trained help is on the way. Fire departments and first responders are found all over the state, but many are not trained or equipped to deal with livestock in an accident. TLAER (Technical Large Animal Emergency Rescue) training prepares volunteers to be first responders capable of working in a team to help save large animals from a dangerous situation.

On the weekend of October 22-23, 2022, more than 50 people from throughout New York State gathered at the New York State Fairgrounds for TLAER training by Dr Rebecca Giminez Husted (more info at tlaer.org). For many years, “Dr Rebecca”, based in Georgia, has been taking her training sessions to classes all over the country. The students on this day included a large group of young women from the Lollipop Farm Rescue of Rochester area (https://www.lollypop.org), a group of active duty mounted policemen from New York City, a few employees of the NYS Department of Agriculture and Markets, several members of OnCART (Onondaga County Animal Response Team), various fire and police officers, and a fair number of members of the New York State Horse Council. The common denominator was a desire to learn how to be of help in a large animal emergency.

The training started out with what could loosely be called a lecture with powerpoint slides, but soon Dr Rebecca broke up the students into six discussion groups of random strangers. Each group was shown a picture of a horse, or a cow, or a deer in a life-threatening situation, and given the goal of coming up with a plan and the needed resources to rescue the animal. Students learned to offer suggestions, consider alternate plans, consider the safest ideas, and mutually agree to a plan of action. In real life, this is exactly how first responders at an incident decide what they are going to do.

To give a historical background, after the highly publicized trauma to pets and livestock during the New Orleans flood following Hurricane Katrina in 2005, Emergency Management planning in New York State started a program to authorize CART (County Animal Response Teams) throughout the state. The state manages this CART program through ESART (Empire State Animal Response Team), headed by Dr Eireann Collins, who was also present. There are several CARTs throughout the state, but progress has been limited by some counties not having the resources to buy all the specialized equipment needed to deal with difficult rescues. Another problem is finding and training volunteers. In order to encourage volunteers, free online training is offered that teaches the basics of incident command, assigned responsibilities, handling hazardous material, and other things that are basic for firemen. This is important because most incidents will require volunteers to work with the firemen who are called to any emergency. The training is not easy, but anything worthwhile takes effort, and people who have horses are not usually looking for the easy way. This weekend of training was provided by NYS Department of Agriculture and Markets - Empire State Response Team (https://alert.ny.gov/empire-state-animal-response-team), with funding from an ASPCA Disaster Grant (https://www.aspca.org/grants). If you are ready to start a team in your area, these are good places to start.

There were a lot of hands-on exercises. Dr Rebecca had OnCART team members (Onondaga County CART), led by President Mark Burger, empty out their large animal trailer to display the specialized equipment, piece by piece, to explain and demonstrate how people can safely handle animals trapped in a mud pit or a wreaked trailer. Students took turns placing rescue straps on two horses brought by two New York State Troopers for the training. (Note: Rescue straps can be improvised by using leaking fire hoses that have been scrapped by your local fire department. If you want to start a CART, this would be a good start on gathering equipment.) Another student brought her herd of goats that had actually been in a trailer accident on a highway near Syracuse. She was able to explain the trouble that first responders had in handling the goats and keeping them off the highway, and demonstrated the preferable method of handling goats. OnCART also brought to the session a life-size and appropriately weighted mannequin horse used for practicing rescue techniques, which is what the students proceeded to do.

Several of the students had previous training, but were there to learn more and encourage the new people. Pam Armstrong was attending as a student and presenter, but she is also a long-time practitioner of large animal rescue with her own trailer of equipment. She is a horse farm owner who has taken the initiative to seek training and buy the necessary tools that allow her to handle large animals with the minimal help usually found on farm incidents. According to her website (www.maplerowfarm.com) she owns “the only equine ambulance in Western New York…able to transport standing or recumbent animals…”

Dr Rebecca did an interesting session walking the students through a few new trailers, pointing out manufacturing specifications in trailer hitches, body reinforcement, brakes, lighting, and dangerous short cuts sometimes found on new and used trailers. She pointed out that adding reflective tape and lights on the back and sides of a trailer might prevent someone from driving into the trailer after dark, especially if broken down on the side of the road. During some of the indoor lectures there were many photos of trailer accidents, where strengths and weaknesses were pointed out, making good lessons out of horrible accidents. As luck would have it, there was a big Quarter Horse reining show going on at the Fairgrounds that weekend, so Rebecca and several students walked down to look at the incredible row of trailers, and took a closer look using their new insights. Being horse people, they also enjoyed watching a few classes!

Sunday morning, the Solvay Volunteer Fire Department brought their rescue truck and a few firemen to demonstrate the equipment and resources that they normally bring to an incident. To those who have not had first hand experience, it is remarkable how much lighting, water pumping, air and electrical generating, and power tools are carried on a rescue truck. This is the fire department that includes the New York State Fairgrounds in their district, so it was a comfort to know how willing they were to participate in training volunteers that they may have to work with in a possible event at a horse or cow show at the Fairgrounds.

The most important part of emergency training is prevention, so a large part of lecture and photos dealt with barn fires; preventing them, seeing how quickly they become deadly, and avoiding injury and death by knowing when to stand back. Although many of the students were younger people with jobs, it was shown that older volunteers, perhaps even retired, could also provide needed help when so many fire departments are finding it hard to recruit new people. A large part of the job that CART team members provide is knowledge and direction to the young firemen at an incident. One needed job is recording team discussions for “after-action meetings”, when an incident is reviewed for what went right and what didn’t. Traffic control at an incident is also critical. Even a trained safety officer who stands and watches the action, warning when an action is unsafe or dangerous, is a vital member of the team. Don’t think you are too old or too weak to be of help.

At the end of the weekend, students left with knowledge, experience, and enthusiasm. They headed out to their various homes, ready to share and work with first responders in their area. As they share their stories, maybe more volunteers will step forward. Remember this: when you need help to save your horse in any kind of an emergency, help will come from people who have spent time and effort to learn how they can be of help. Perhaps that person could even be you!