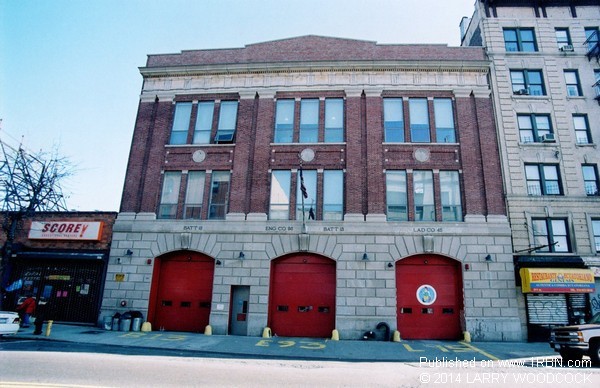 Washington Heights is one of the most bustling neighborhoods in all of Manhattan and the five boroughs.

With its Dominican heritage, its signature main street (181 Street), traffic and crowds, along with a large commercial district; the streets are always jumping here.

The neighborhood also provides dramatic views of the George Washington Bridge and the cliffs of the Palisades, across the river in New Jersey, which are visible from the high bluffs along Haven Avenue.

Bennett Park, located on 183 Street between Fort Washington and Pinehurst Avenues is named after James Gordon Bennett, the publisher who first started the New York Herald, the first city newspaper in 1835.

The James Gordon Bennett medal is the highest medal awarded to a New York City firefighter every year, for an act or acts of bravery in the line of duty. The medal was first endowed in 1869 and was the department’s only medal of valor for 27 years.

The park is home to the highest point in Manhattan at 265 feet above sea level. A stone marker attests to this fact and sits on a large outcropping of rock at the South end of the park. Besides being the highest point in the borough, some of the best-kept buildings and tree-lined streets overlooking the Hudson River also make this some of the most desirable real estate.

The park was also built on the former site of Fort Washington, which served as a lookout during the Civil War. A bronze and marble plaque commemorates this fact. It sits on a wall along the East side of the park.

There is a firehouse in the middle of this busy neighborhood “The Might of the Heights”, 93 and 45 on 181st Street off Amsterdam Avenue.

Both companies as well as the firehouse celebrated their 100th anniversary in March of last year. This is a firehouse with a stellar reputation and is well known for being squared away, in fire department terminology.

In one hundred years of service to its community, Engine 93 and Ladder 45 along with the 13th Battalion have endured four line of duty deaths with one occurring in one of the worst disasters to hit the City of New York.

On December 11th of 1946 just before midnight, a fire started in the abandoned Knickerbocker Ice Company plant located on Amsterdam Avenue and 184th Street.

The building was five stories tall with massive brick walls and cork insulation, which supported a concrete roof and was designed to keep the ice frozen.

The fire apparently started in a pipe chase. Then, it extended horizontally and throughout the cork insulation. At about one hour into the fire, the roof of the plant collapsed onto the top floor, which pushed out an already fire weakened 36 inch wall onto an adjoining occupied tenement next door.

The collapse tore away the rear of the tenement, creating a large pile of concrete and rubble from both buildings. This entombed many people. Inside the tenement were more then 60 residents some sleeping and unaware of the fire next door. Some had gathered on the roof to watch the fire.

Multiple alarms were transmitted, five in all. Firemen worked for more then 48 hours digging and tunneling under extremely dangerous conditions in order to reach those trapped.

Many heroic rescues were made. Medals of Valor were awarded to eight firemen, but sadly 37 people were killed and 40 were injured. Included in the dead was Fireman Frank Moorehead of 93 Engine, who gave his life in performance of his duties to the City of New York.

The 13th Battalion was organized on October 1, 1898 and was moved around before finding a home here in January of 1916.