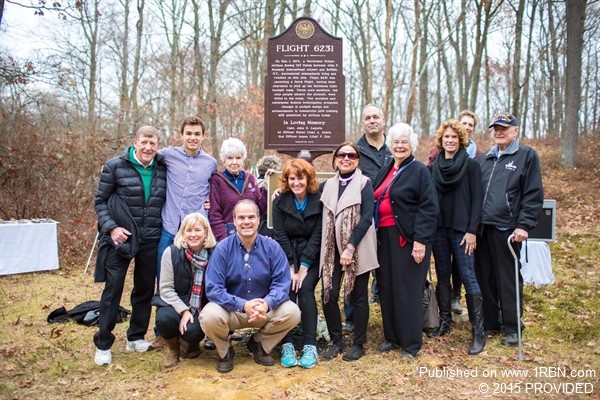 December 1st, 1974 was a cold, rainy day and night. The temperature hovered just above freezing with the type of damp cold that gets into your bones. I remember that night very clearly after 41 years because just before 7:30 p.m. our dispatch center put in the tones for three adjacent fire departments simultaneously. I was at one of our fire stations serving as a Lieutenant with the Hillcrest Fire Company. We heard the multiple tones coming over the dispatch frequency. We all boarded the apparatus and pulled out on the apron, assuming that we were being dispatched to a major structure fire. The dispatcher announced that they had received an emergency notification from the air traffic controllers at Kennedy Airport, indicating that they had lost radar contact with a large Boeing 727 Commercial Jet Liner in the general area of the three very large fire districts.

The Fire Chiefs from all three departments requested more information, but there was none. We all waited, expecting numerous telephone calls from residents reporting a crash, fire, damage, etc., but there was silence. Back then we did not have 911 service, GPS, thermal imaging, cell phones, etc., unlike today when more detailed information would have been available immediately.

The Chiefs and their teams utilized maps working with law enforcement started driving all of the paved and dirt roads in the very large search area. Several hours went by with no leads except for a confirmation that the commercial airliner was missing. Eventually, a New York State Police Officer driving in on a one-line access road to a summer camp in a very remote & mountainous area, noticed a very strong odor of aviation fuel. With this information, the crash site was eventually located. There was no fire, no survivors; just a scar in this remote location with plane parts scattered over an acre or two.

The investigation revealed that the Pitot Gauge Heaters were not activated, allowing them to ice up. Several minutes into the flight the pilots could be heard saying, "We must have one heck of a tail wind. We are doing 550 knots. " It is doubtful that the aircraft could actually travel that rate of speed. The crew decreased their speed, ultimately losing control of the aircraft, which resulted in the tragedy of the plane crash.

Last December a reporter for the local daily newspaper approached me about a 40th Anniversary Story of the disaster. In the interview with me I mentioned that I had always felt that the site should have a memorial of some type that would indicate that it was an area where a major disaster took place. I am an avid hiker, and at some point after the plane crash in 1974, a trail called the "Long Path" was created. This trail starts at the George Washington Bridge, is well over 300 miles long, and extends to the Adirondack Mountains in northern New York. Coincidentally, the folks that laid out the trail designed it so that it went right through the crash site, and thousands of hikers unknowingly hike through the very remote site every year.

After the article was published, I was approached by several other people who also thought that the site should be memorialized. We got together and started planning to do just that. On November 7th, over 100 people attended the dedication site with many hiking in the mile from the nearest public road. To say that this was a rewarding experience for all involved is an understatement.

My youngest daughter, Alexandra Wren attended the event and posted her thoughts on her blog. She explains the emotional impact that this memorial had on all of us, better than I can.

...
This post is quite different than the brides and babies and engaged couples I usually feature, but it is, by far, the most emotional and moving experience of my photography career. My favorite aspect of what I do is the inspiration that I discover and the human connection that I make with every person I cross paths with on my photography adventures. The events that I was blessed to experience this weekend were so powerful and transfixing that I can only hope I can do it with justice in this post.

Since I was tiny, my father, the king of hiking and all things nature, had my little legs on so many hiking trails throughout Harriman State Park that I probably memorized all the trail markers before I knew the alphabet. He instilled such a love for the woods, and especially Harriman in me that I now, as an adult, often find myself seeking peace and reflection there during every difficult or trying time in my life. The connection I've developed for the woods and mountains of this park have molded my character and have on many occasions, reminded me that this life is a blessing and as much bad as there is in the world, there are good deeds to be done and happiness to spread and I am obligated to get back out there and do some good. Several times over the years, my father has mentioned the site of a plane crash close to where we loved to hike. Even as a child, I remember him telling me that if we visited the crash site, he would be able to show me pieces of debris that still remain on the forest floor, decades later. After years of knowing the crash site but having never been there, my father announced that he was determined to have a memorial put up where the three men on that plane lost their lives.

On December 1, 1974 at 7:26 p.m., the plane, a Boeing 727, chartered to pick up the Baltimore colts in Buffalo, NY experienced atmospheric icing and crashed in a marshy area of Harriman State Park, not far from St John's in the Wilderness Church and Lake Welch Drive. The three crew members on board, Captain John Lagorio, First Officer Jim Zadra and Second Officer James cox all perished in the crash. After an investigation, the crash led to changed in cockpit design and several life-saving advancements in commercial pilot training that are still practiced today.

My father's idea to have a memorial put up at the crash site was partially fueled by the fact that the site itself sat directly on a portion of the Long Path..a trail hiked by many hikers each year. These hikers were walking through sacred ground without even knowing it. His plan, to clear away the now overgrown brush, install the memorial and hold a small ceremony began to gain momentum and within months, he and several other collaborators were in touch with the victims' families about their intentions. What started out as an idea for a memorial turned into a beautiful plan for a church ceremony, an intimate plaque unveiling and a dinner to remember and celebrate the lives of those lost. For months, I listened to my father answering and making late-night phone calls to plan for the memorial, even watching him return from he crash site covered in sweat and dirt after digging the hole for the memorial himself...I thought I was inspired then, but I had no idea what was to come.

On Saturday, November 7, 2015, the families of the victims gathered in the tiny, beautiful church less than a mile from where their loved ones were lost. The children and siblings of the victims spoke, telling funny stories and sharing moments of comfort they've found over the years. After the peaceful service, the memorial began at the crash site, nestled in the woods just a few minutes from the church. The experience of the flight attendant, who flew with the lost men just hours before the crash spoke, telling of her account of the heroic men she knew them to be. Shortly before noon, accompanied by a helicopter flyover, the memorial was unveiled before the tear-filled eyes of the victims' families, 41 years after the crash. After hearing touching words from the families, carnations were left at the base of the memorial and, to my absolute amazement, tears turned to smiles and grieving hugs became joyful embraces accompanied by laughs and relieved sighs..happy, grateful, relieved sighs.

The families of the victims flew from across the country to be at the memorial..from as far away as Minnesota, Washington, California, and Wisconsin. And even more amazing to me was the fact that so many of the family members said to me that they had not been in contact with the other families...that they had simply settled back into their own lives, grieving alone with little closure and without discussing the events of that awful day. As I excitedly accepted an invitation to join the families for dinner later that night, it became clear how powerful this dedication ceremony was for all those present. After 41 years, the families of the victims were together, honoring their loved ones and sharing in the comfort of each other. As I looked around the dining room, it was amazing to see so many happy faces, to hear such beautiful accents from across the country and to know that a great idea and patient, hard work made it all possible for these new friends to be here, together.

One of the most powerful moments of the day was the time I spent talking to the sister of one of the pilot's wives. We spoke about life, tragedy and the human ability to be resilient and continue on...that happiness is something you must work for, and if you stop living life to it's full potential, you slowly begin to slide backwards. You must do what you love and embrace the past to live a truly fulfilling life. Happiness, above all else. I'm tearing up just thinking about this sweet conversation!

After a night of happy stories, belly laughs, learning about our new friends, exchanging contact information and promising to never lose contact..Cathie, the wife of Captain Lagorio, announced that everyone was to take home the centerpieces on each of the tables; star-shaped glass bowls housing a pretty little candle. She added, "because my husband was a star. Thing of us every time you light it."

May this emotional story and these portraits inspire you to pay it forward and change someone's life...even in a tiny way. Every tragedy is an opportunity to find a new, brighter light of hope and happiness and most of all, it is never too late.

You are never alone. The "star" now has a permanent place on my desk as a reminder of this beautiful day.

My wife Robin and I are very proud of Alexandra. She joined the Hillcrest Fire Department over nine years ago. Ironically in September 2014, she experienced a severe ankle injury at an early morning structure fire with a surgery that did not succeed in fixing the injury. This injury has made it impossible for her to take the long hikes that she loves and prevents her from fighting fires.