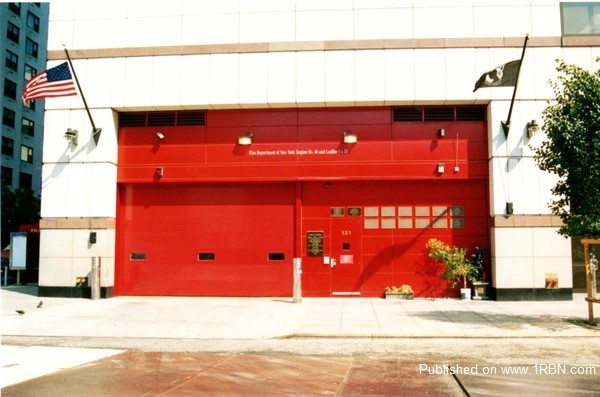 Cavemen still do exist in New York City, Manhattan specifically at 40 and 35 located at the corner of Amsterdam Avenue and 66th Street.

The quarters of 40 Engine and 35 Truck are on the ground floor of a sixty story high rise constructed in 1988. Prior to then, the firehouse was a stand-alone structure, and with real estate as precious as it is in Manhattan and with limited space, the need to build up has been the focus for many years.

So, the decision was made to knock down the old firehouse and incorporate it into a high rise with the firehouse occupying the first floor. Construction took the better part of five years. During that time, the companies responded out of a garage near Lincoln Center.

The neighborhood was once called San Juan Hill, an enclave of low-rise tenements densely packed. It was characterized as a “rough place” with notorious fights and violence between the neighborhood residents, which consisted of Irish, Italian, and Puerto Ricans.

Different theories abound about how San Juan Hill got its name. Later on, it was the most densely populated African American neighborhood in Manhattan.

And in the 1950s, the housing authority called it the worst slum in New York City and made plans to demolish the tenements and build what became Lincoln Center.

The neighborhood is best known for jazz great Thelonious Monk, who lived here for many years as well as the film West Side Xtory.

Released in October of 1961 and starring Natalie Wood, the musical filmed on location in the streets of San Juan Hill and won best picture as well as ten academy awards. The demolition of the ten block area was held up until the filming of West Side Story was completed.

Shortly thereafter, the neighborhood was bulldozed with the approval of civic leaders and the plans of master builder Robert Moses’s program of urban renewal.

Despite numerous protests by residents, eminent domain prevailed, with families fleeing to the Bronx and other neighborhoods in Manhattan. Over the next thirty years, Lincoln Center became the hub and the focal point of the performing arts community in the New York metropolitan area.

In 1962, the New York Philharmonic Hall opened. The Metropolitan Opera, the New York City Ballet, the Juilliard School, and the Film Society of Lincoln Center followed that. In all 30 indoor and outdoor performance stages totaled over 14,000 seats.

40 and 35 are also first due to one of New York City’s iconic landmarks, Columbus Circle. Situated at the intersections of Eighth Avenue and Central Park South, the monument was built in 1892 to commemorate the 400th anniversary of Christopher Columbus landing in America.

The marble statue of Columbus sits atop a 70 foot granite column that includes bronze reliefs of his fleet of ships the Nina, the Pinta, and The Santa Maria. The circle itself was completed in 1905 and no better place to put it then at the foot of one of the most famous streets in America, Central Park West and the Merchants’ Gate entrance to Central Park.

40 Engine is one of the oldest companies in the FDNY and originated on July 29,1874. It was located on the East Side at 2nd Avenue with several locations in between before moving to their current home in 1993. They have been in a firehouse with the truck since 1960.

35 Truck originated on November 1, 1907 and had several locations before coming here in 1993. Like so many firehouses in New York City, 9/11 took so much from this place. Twelve men lost their lives that day and in their history. Nineteen members died in the line of duty.

A book was written by New York resident, writer, and Pulitzer Prize Winner David Halberstam called Firehouse, a tribute to his local firehouse 40 and 35 and the men he knew. I recommend reading this book to gain some perspective on the lives of some of the men, who died in the performance their duties.