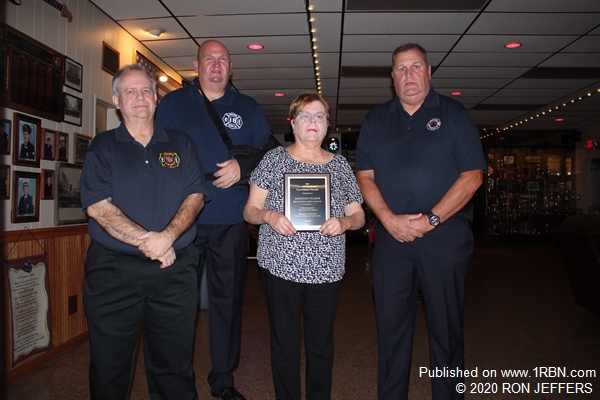 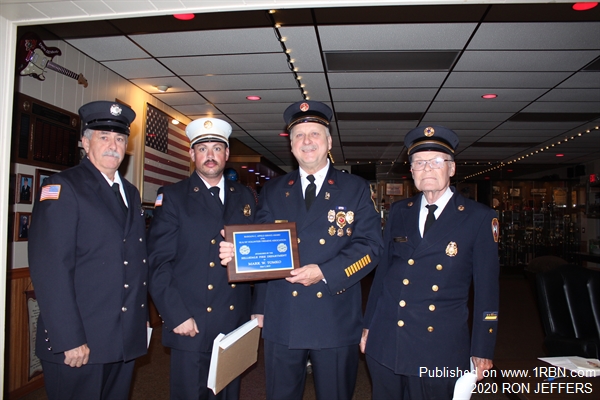 Due to several emergency delays, and COVID-19, several 2019 awards issued by members of the New Jersey & New York Volunteer Firemen's Association were presented at Wallington Engine Co. 202's firehouse on the evening of September 21st.

For nearly half a century, Palmer has served her community and supported her firefighting family. Over the years, her husband, ex-Chief Charles Palmer, has served with the fire departments of Wallington, Rutherfod and Lyndhurst. Their three sons are also part of the fire service.

Palmer has served as trustee, vice president and president, as well as the auxiliary's treasurer for the last 40-years. She has been involved in fundraisers, Christmas fares and dinners. In addition, Palmer has led the auxiliary in efforts for the company's memorial services, anniversaries, parades and wet downs. All of this, plus the auxiliary's duties of providing refreshments at fires to “her firefighters.”

Mark Tomko received the NJ & NY VFA's Rudy Appeld Service Award, sponsored by the Hillsdale Fire Department. Tomko has service credentials as long as your arm. This includes serving as fire chief in 1989, councilman on three separate occasions, and becoming mayor of the borough in 2015. In addition, he has been appointed fire commissions 18 different years since 1982.

It all started out when Tomko became a charter member of the Wallington Junior Fire Department in 1972. He became a member of Park Row Hose Co. 3 in 1975. Tomko has served in all line ranks as well as company president, treasurer, engineer, secretary, and he has been department chaplain since 1980.

Tomko is an honorary member of Engine Co. 202 and the Emergency Squad.