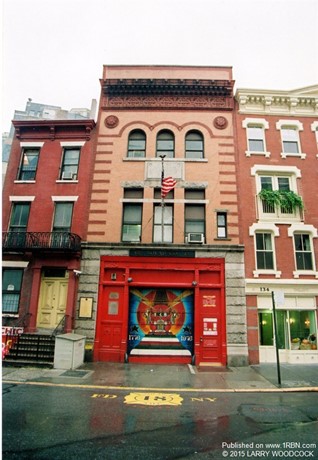 The West Village of Manhattan of today is a far cry from its days of the “Wild West Village”. Today, it is a mix of beautiful brownstones, great restaurants and desert shops, located off of Hudson Street.

Streets here can be a bit confusing as numbers change to names and are set at angles unlike other streets in Manhattan. Loft apartments fill the neighborhood along with bars, clubs and artists, who have called the West Village home for decades.

The best pizza is here at John’s on Bleecker Street just off of 7th Avenue. With four locations in Manhattan, this is the original location and it is the best in all five boroughs. After coming here for 25 years, I can say it is the best coal, brick oven pizza.

Over at 132 West 10th Street, off of Greenwich, is the firehouse of Squad 18, a company with a long-standing history with the FDNY. One of the most beautiful and oldest firehouses in the city, it was built in 1892 for a cost of $19,000 by legendary Architect Napoleon Lebrun.

In their first due area is one of Manhattan’s most iconic symbols, Washington Square Park, located at the foot of Fifth Avenue.

The park’s arch was built in 1889 to celebrate the 100 year anniversary of president George Washington’s inauguration. Standing at 77 feet in height and modeled after the Arc De Triomphe in Paris, it was designed by New York Architect Stanford White.

The first fountain next to the arch was built in 1852. Later on, statues and monuments were erected for George Washington and Italian patriot and soldier Giuseppe Garibaldi.

Surrounding Washington Square Park is New York University better known as NYU, a private American research university, which dates back to 1831. The university is located in six different centers in Manhattan and Brooklyn with more than twenty schools and colleges.

It’s enrollment tops 53,000 students and has had 35 Nobel Prize and 16 Pulitzer winners among its graduates. The campus has grown to 230 acres and continues to look to purchase more property for the demand of its expanding enrollment.

Despite its nice location, Squad 18 has not been immune to tragedy. On September 11th, seven members were killed in the collapse of the World Trade Center. And, 2016 marks the fiftieth anniversary of the Wonder Drug store fire. One of the many dates that live in infamy for the fire department.

On October 17, 1966 a box was put out for an odor of smoke at 7 East 22nd Street at 9:30 p.m. Companies arrived and began to operate in the four story 20 x 100 foot building that housed a lampshade manufacturing company in the cellar and first two floors with residential apartments on the top two floors.

A short time later, companies were directed to the Wonder Drug store at 6 East 23rd Street due to activated alarms. Crews found a light smoke condition inside after forcing entry. As companies entered the cellar, no extension of fire was evident, but on 22nd Street the fire was difficult and showing no signs of being knocked down.

Second and third alarms were transmitted as fire was noticed moving in the shaft between 22nd Street and now Broadway. As conditions began to deteriorate and heat began to build, members withdrew to the top of the stairs and then were hit with waves of heat with several members burned.

What was unknown up until then was that the design and major alterations to the building had hidden an undetected fire that was burning in the cellar of the adjoining art dealer. A five-inch thick cement floor, the fact that the drug store first floor was one hundred feet deep, as well as a cellar that was only 65 feet deep insulated the fire.

The adjoining art dealer’s cellar extended one hundred and thirty five feet with the northern most thirty-five feet burning beneath the drug store. When the beams burned away, they collapsed without warning sending 12 men into the burning basement. Fourth and fifth alarms were transmitted and multiple daring and heroic rescues to save those trapped were too late, as twelve hundred off duty firemen arrived at the scene to help.

It was not until 1:45 the next day that the last of the twelve men was recovered. Across the street, thousands of on duty and off duty firemen gathered and stood with heads bowed until the last man was recovered. Included in the dead were five men from Engine 18.

In all, they have suffered through fourteen line of duty deaths in the company’s history. Please remember their sacrifice to the City of New York.