A Fire Department Growing with the City 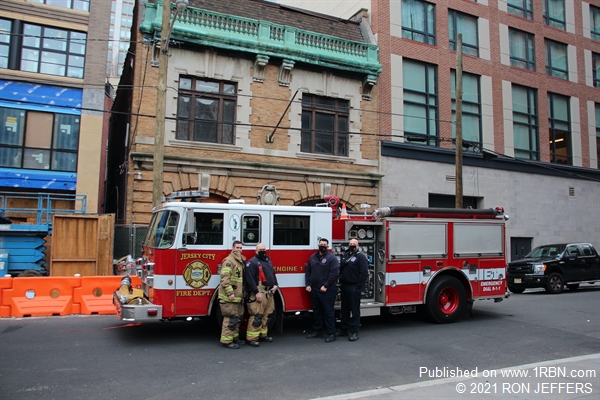 Photo by RON JEFFERSThe first crew on the re-activated Engine Co. 1 posed with their rig in front of one of the company's former firehouses on Morgan Street, now sandwiched in between tall downtown buildings, and privately owned. The first crew was (L to R): Captain John S. Bellezza and Firefighters Joseph Parreno, Brian J. Mills and Mike Somma. 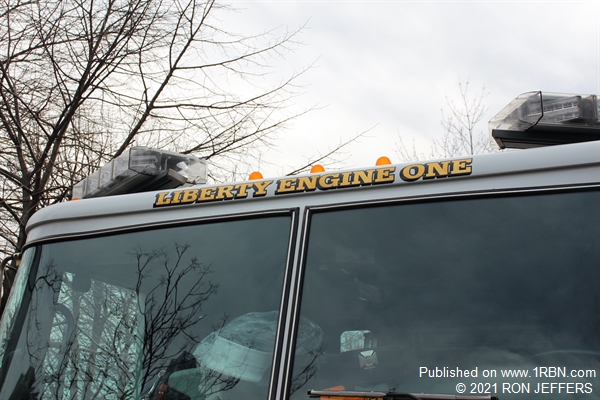 Photo by RON JEFFERSThe original name of the Liberty Engine Co. 1 from 1829 is located on the 2021 version of Engine 1, above the windshield.

Redevelopment of the Hudson River waterfront has made Jersey City one of the largest centers of banking and finances in the United States. There are around 200 high-rise buildings in this city now, with many more on the drawing board. Currently, nine of the state's tallest buildings are located here, according to Fire Chief Steve McGill.

As a city grows, the fire department must keep up. In 2019, the department acquired a new pumper with a 2000, three-stage pump that is rated to pump 500-GPM at 700 psi. Water can reach the upper floors of these structures quicker, as well as assist with operations in the event of a building pump failure. This unit is assigned to Engine Co. 6 in the downtown section.

In addition to this apparatus, a former downtown engine company was recently re-activated in this sprawling area. In the local fire service, we have become all too familiar with fire companies being closed and departments conducting “brown outs,” closing one or more fire companies on a particular tour when manpower is low and over time is not an option.

On January 8th, Engine Company 1 was reactivated, operating from the Newark Avenue firehouse along with Engine Co. 5, Ladder Co. 2 and the Chief of the 1st Battalion. Engine 1 was disbanded on March 22, 1991, along with Engine 22 (since re-activated) and Truck Co.'s 1 and 5.

According to the general order, Liberty Engine 1 was re-established and recognized as a fully equipped reserve engine company. It will be placed in service whenever appropriate staffing is available and/or during recalls.

In addition, this G.O. states that Liberty Engine 1 was established on October 2, 1829, as the department's first engine company. The current Engine 1 has “Liberty Engine One” lettering located above the windshield.

After new firefighters were sworn in on the steps of City Hall on December 8th, the department boast 657 uniformed firefighters and officers. They protect a population described as 300,000 by Mayor Steven Fulop.

The influx of new firefighters enables every firehouse to be fully staffed, according to a city statement. With this manning, Engine 1 should be on duty more than it is off. A step in the right direction for a growing city.