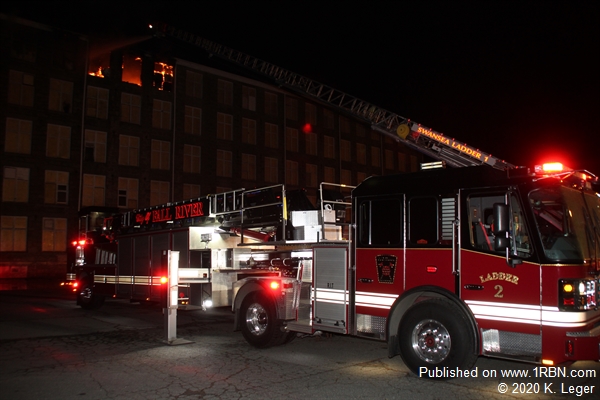 Photo by K. LegerLadders move into position on the East side 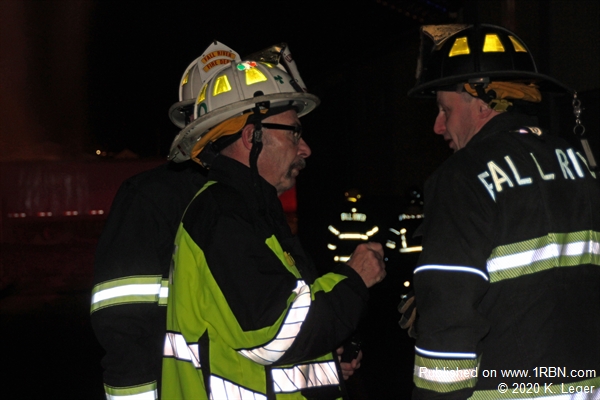 Photo by K. LegerChief John Lynch gets a report on conditions

Fall River, MA - On January 13th at 12:30 A.M., a police officer on patrol discovered a working fire in a five-story granite mill at 62 County Street. Fire command arrived on scene just as a second still alarm was being dispatched for a second fire elsewhere in the city.

Command requested two additional Ladder companies, which required the use of mutual aid. He informed dispatch that he had a five-story heavy timber mill with fire showing from the ground to the roof on the exterior of the building. Command continued to call for additional resources that came from numerous neighboring communities.

Several mutual aid ladder companies were used as the fire took hold on the fifth floor and raced across the top floor from west to east. A working fire sprinkler system helped to hold the fire in check on the lower floors of the mill that was packed with product.

Chief John Lynch arrived on scene and called for a general alarm, recalling all city firefighters and support personnel and activating the Bristol County Mutual Aid response, with help coming from as far away as Seekonk to the West and New Bedford to the East.

Just about four hours into the fight, the fire was declared under control. Preliminary investigation is leaning to arson as a cause.