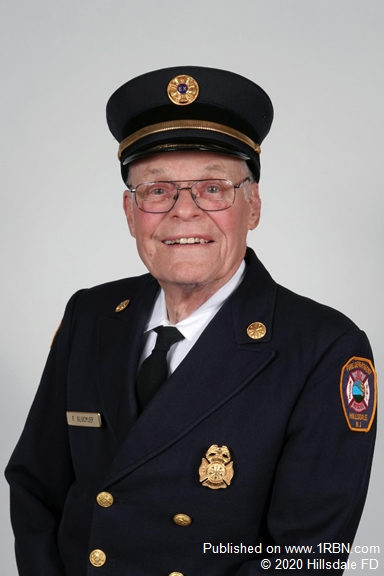 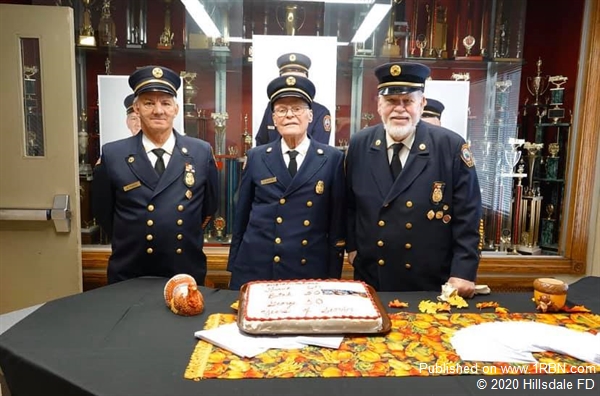 Photo by Hillsdale FDChief Glucker (in the middle) with Bill Franklin and George Wodowski, who both celebrated their 50th year on the Hillsdale FD 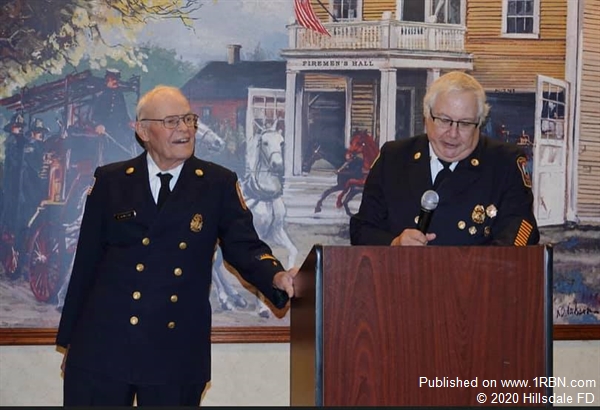 Having started a surveying business the year before, Hillsdale Fire Department fire fighter and Ex-Chief Frank Glucker was working late in the office. He received a phone call from his next door neighbor who said, “Your wife thinks you should come home. There has been a small fire in your house.”

“A frayed lamp cord in my daughter’s bedroom is how I joined the Hillsdale Fire Department,” says Fire Fighter Frank Glucker. “The cord set fire to a bedspread on my daughter’s bed and she yelled to my wife that it was on fire. So the two of them left the house and ran next door and called the fire department.”

“When I arrived at the firehouse with the donation, an Ex-chief was there with a Captain on the department in front of the firehouse hosing down the apron. After I dropped off the donation, the Captain asked me if I wanted to join the Department. I joined the Hillsdale Fire Department when I was 34 years old,” FF Glucker explained. It was October 27th, 1959.

Over the years with the Department, he has held so many jobs within the Department they are too numerous to list them all. He started out as the Secretary of the Hose Company and then Drillmaster in 1962. He then moved on to be a Driver of the apparatus from 1964 until 1981 and Mechanic of the equipment starting in 1966.

He moved into an Officer position in 1966 when he became the Third Lieutenant of the Hose Company, then Second Lieutenant in 1969, First Lieutenant in 1970, Captain in 1971. He then moved to Assistant Chief in 1972 and finally served as Chief of the Department in 1973.

When he was Chief, he was in command of the largest event ever held by the Department. A Brownie scout, selling cookies went missing. For two days, the entire Pascack Valley Mutual Aid combed every yard in the town looking for her. The search even covered additional towns. Her body was eventually found at Bear Mountain. “It was a tough moment for us,” he said.

On a higher note, he enjoyed his time as Chief of the Hillsdale Fire Department. “There was a real comradery in our Department at the time and we had a good time. We won ‘Best Overall Apparatus’ (New Jersey/New York) in the Parade that year.”

Another program that he worked on with other members of the Department was the Junior Cadet Program which has been revived in recent years. “We had a young officer who really enjoyed working in the program and he planned the meetings and drills for the members. Many of these members have moved up to regular firefighters and have strengthened our Department.”

Other ways that he has helped the Fire Service was in 1984 when he got involved with the Wildwood Parade during the Convention. “The local announcer knew nothing about the fire service so I volunteered to assist him with the parade the next year. I did this for more than seventeen years and after twelve years of announcing the parade, the local announcer was unable to continue so I became the host. After five years, we suggested an interview show and we started “Firemen Speak” in 1989 in which I hosted,” said Ex-Chief Glucker.

“The Rudy Apeld Service Award’ of the New Jersey and New York Firemen’s Association was started when I realized that many firefighters were not recognized for their service in reaching out to their community. This award goes to those who were never a hero but who reached out through their Mutual Aid Groups, Fire Service Organizations and the fire service. They get involved with their churches, scouts, Little League and other municipal organizations. It has been a big success,” he explained.

“In 1998, I got active in the New Jersey State Firemen’s Exempt Organization and since 2004 I have been one of the Executive members. We meet all over the State and strive to represent the fire fighters as no other organization can,” says FF Glucker.

When asked how all this time on the Department affected his family life, he said that he was lucky that everyone in his family was so supportive. “My wife of 51 years really loved the Department and the other members. She served as the President of the Ladies Auxiliary and my daughters would do errands when needed. One of them married a firefighter from the Department. I had set it up as a blind date for a Department Dinner and they ended up marrying,” he explained.

Asked how his keeps going at 95, FF Glucker noted that, “I work out every day and get lots of exercise as a land surveyor. I eat right and keep myself active. I am always at meetings. I also like to learn new things within the Department and the Fire Service. I learn so much from other Departments that I visit. Meeting many interesting people and trying to keep a really good attitude keeps me going,” he said with pride.

“Even though there aren’t any of my original compatriots left in the Department, I try to have a good relationship with the younger members of my Department. We as a Department work well together and have since I started,” said Ex-Chief Glucker. “I have always enjoyed being a fireman.”

Thank you Fire Fighter Glucker for your years of continued service to the Hillsdale Fire Department and for your representation in the State of New Jersey.